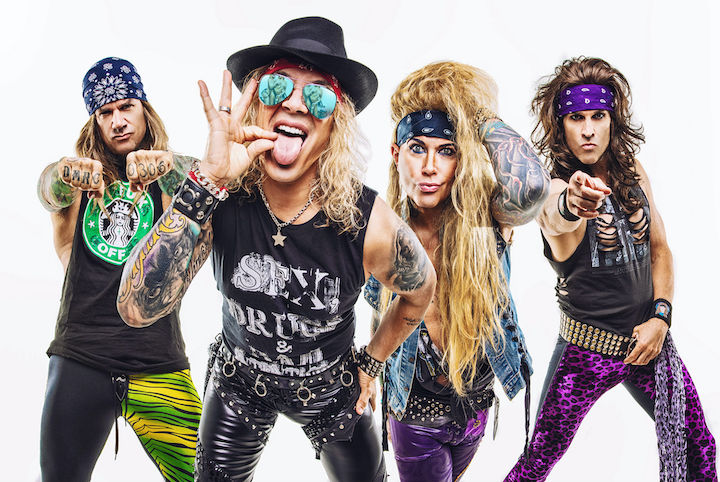 Lock up your daughters, Newcastle. Actually, just to be safe, better lock up your mums, dads, brothers, sisters. and anyone you hold dear because Steel Panther are coming to town.

Yep, that’s right those kings of crude metal are winging their way to our fair city as part of their national Heavy Metal Rules tour which will hit NEX Newcastle on Tuesday 26 May.

Further, in somewhat of a surprise pairing they will be bringing bottom-heavy nu-metal stalwarts Sevendust along for the ride.

Sevendust kicked off with a blistering string of three gold albums, beginning with their self-titled 1997 debut and continuing with Home in 1999 and Animosity in 2001 and are continuing that trajectory with their 12th studio album All I See Is War.

Steel Panther, meanwhile, is touring off the back of their fifth studio album, Heavy Metal Rules and with songs like All I Wanna Do Is F**k (Myself Tonight), Gods Of Pu**y and F**k Everybody, it’s pretty safe to assume that this show isn’t one for the easily offended.

Embodying the hard livin’ spirit of LA’s Sunset Strip that was epitomised by the likes of Mötley Crüe, WASP, Poison and LA Guns, Steel Panther revel (or perhaps wallow is a better word) in the debauchery, excess and spandex that was ’80s hair metal.

Starting life as a cover band (named Metal Skool) Michael Starr (vocals), Satchel (guitar), Lexxi Foxx (bass) and Stix Zadinia parlayed their love for and knowledge of the genre into a career that has established Steel Panther as one heck of a party band.

Melding musical virtuosity with a healthy dose of tongue in cheek parody, Steel Panther gained traction right out of the gate with its blistering 2009 debut Feel The Steel, helped along, no doubt by the lead single Death To All But Metal which featured an appearance from Slipknot frontman Corey Taylor.

Catch Steel Panther and Sevendust at NEX Newcastle on Tuesday 26 May. Tickets are on sale from 9am on Wednesday 11 March. Get them here.

ALSO ON NEWCASTLE LIVE
US rockers The Schizophonics to blow the doors off the Badger’s Lair
Hot Flush to unleash new single just in time for International Women’s Day
HIRSUTE HERO: Victorian hair farmer takes out MULLETFEST 2020 top honours
SAVE THE DATE: On-point satirist Friendlyjordies is back for THREE Newcastle shows