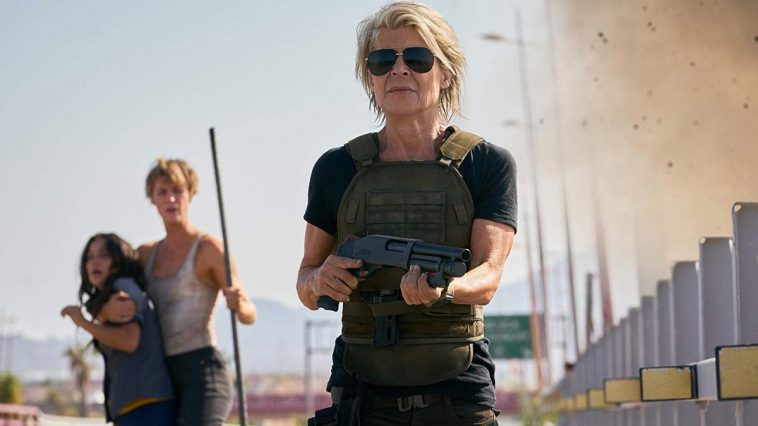 When director James Cameron teamed up with a then relatively unknown Arnold Schwarzenegger and actress Linda Hamilton in 1984 for The Terminator, they captured celluloid lightning in a bottle.

That film’s follow-up, the record-breaking blockbuster Terminator 2: Judgement Day continued in that same trajectory and is still considered one of the greatest sci-fi action flicks of all time.

Cameron departed the franchise after T2 but it soldiered on regardless with three more lukewarm follow-ups Terminator 3: Rise Of The Machines, Terminator: Salvation and Terminator: Genisys.

Now Cameron has returned to the fold, (in a producer capacity only) with Arnie and Linda in tow for Terminator: Dark Fate. And on paper that trio alone should be enough to ensure yet another blockbuster.

This time around, we follow Grace (a very watchable Mackenzie Davis) – an ‘augmented’ human soldier sent from the future to protect the seemingly ordinary factory worker Dani Ramos (Natalia Reyes) safe from the latest Terminator model Rev-9 (sound familiar?) a malignant bucket of tech who is apparently unstoppable.

Dani soon runs into the gruff and surly Sarah Connor (Hamilton) the heroine of the first two flicks and when Arnie’s stoic Terminator 9now going by Carl) steps into frame, you’ve got yourself a revisionists fever dream, sir.

If you are a fan of the Terminator franchise, especially the first two, there is stuff to like here. Firstly the reunion of Cameron, Arnie and Linda does bring a sense of excitement to proceedings.

Secondly, the fact that this iteration picks up after the action of Terminator 2, means that the subsequent three flicks in the franchise are wholly redundant and depending which side of the fence you sit on that could be either a good or bad thing.

However, while there were some great set-piece moments to be found here. Director Tim Miller opts for a much more grounded approach to story and there was a palpable sense of glee the first time Arnie filled the frame.

But there is an overarching sense that this has all been done before.

And it kind of has. On the face of it, the plot of Dark Fate reads almost exactly the same as Judgement Day.

So, if you’re a fan of the franchise this is worth a watch, but if you only show a passing fancy, go back to the source material. You’ll be all the better for it.