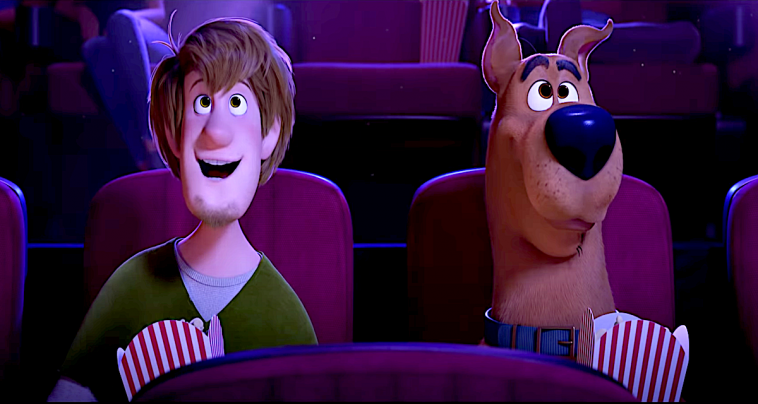 Scoob! is the latest iteration in the now 51-year-old Hanna-Barbera franchise (that’s a whopping 357 dog years!) and this time around, we find ourselves right back at the beginning.

Here we get to see how the beloved great dane Scooby Doo first crossed paths with his future partner in crime-busting Norville “Shaggy” Rogers and how they eventually came to establish Mystery Incorporated with fellow “meddling kids” Velma, Fred, and Daphne.

Fast forward ten years and, looking to expand, brings investor Simon Cowell (yep, that Simon Cowell) into the picture who quickly suggests that Scooby and Shaggy are not cut out for mystery solving hijinks.

Separated from the gang, Shaggy and Scoob are attacked by a gang of malicious robots who may or may not be controlled by legendary moustache-twirling Hanna-Barbera villain Dick Dastardly.

While the plot might be a little messy at times, Scoob! there are still some positives to be found here.

While it may rely on big action sequences rather the wacky mystery-solving shenanigans of the original cartoon, the jokes here – both self-referential and pop-cultural- are, generally, more hit than miss.

One of the highlights, though, is the stellar voice cast including Will Fotre as Shaggy, Zac Efron as Fred. Amanda Seyfried as Daphne and Mark Wahlberg as the Blue Falcon.

Also, older fans of the Saturday morning cartoon era will enjoy some surprising cameos from other Hanna-Barbera alumni such as Captain Caveman (voiced by comedian Tracey Morgan).

While Scoob! never lives up to the same dizzying heights of the zany ’70s Hanna-Barbera cartoon, it is one of the iconic pooch’s better feature-length outings