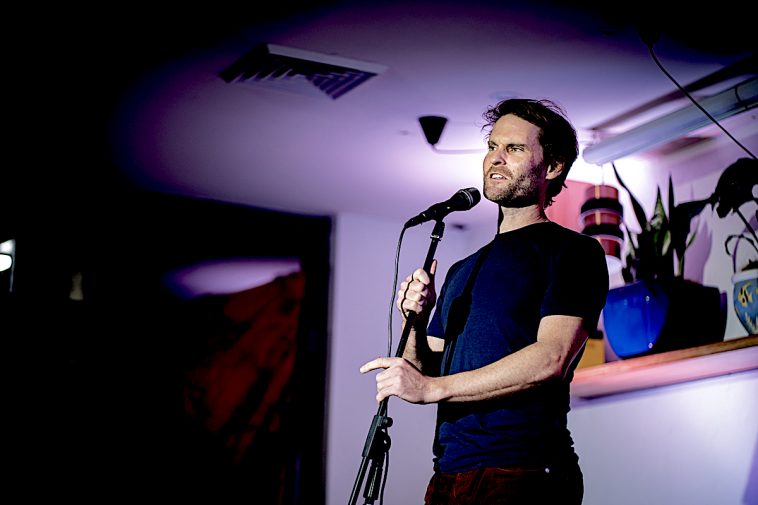 Reasons to laugh have been rarer than my neighbour Ken’s teeth in 2020.

When you weigh the fallout from the bushfires, the social and financial devastation of the global coronavirus pandemic and the horrific injustice bestowed upon Knights fullback Kalyn Ponga when he was inexplicably found guilty of a Grade 1 shoulder charge by the NRL match review committee in March, it’s fair to say that this year has been absolute dog shit.

But restrictions have eased. The tyranny of coronavirus has been eradicated.

Now we Novocastrians can emerge from hibernation, return to each other’s embrace and resume the wanton spread of our preferred submicroscopic infectious agents.

Given all we have endured, it’s no surprise that two Big Dog Comedy stand-up showcases at the Happy Wombat have sold out on this chilly winter’s Saturday night.

There’s no better way to get the laughs flowing and turn this year’s fortunes around than with two of the city’s favourites, Luke Heggie and local lad Cameron James.

James might not be one of Newcastle’s two favourite sons, because they both share the last name Johns, but he would definitely be in our top 30 or so.

A quality stand-up, actor, podcaster, producer and writer, James is also the former frontman of trip-hop group Fictions, a class live act that ranks amongst Newcastle’s other iconic one-word-name bands, like Silverchair, Seabellies and Thescreamingjets.

Tonight James is the mischievous master of ceremonies, and he warms the crowd with a generous opening 20-minute stanza. James is a sharp comic but, like many others, is at his best when he’s being puerile. That’s where, for this reviewer, the nuggets of gold are to be found.

Given the extended period of absent live performances, tonight’s collection of comedians could be forgiven for being a little rusty.

On stage, Sydney’s Kathryn Thomas is a droll self-deprecating introvert, delivering self-contained two-line quips with aplomb. Her set is sharp and deadpan and proves an unexpected highlight of the evening.

Second in the line-up is Paul McMahon who explains that he’s now a local, having upgraded from the sun-drenched slums of Byron Bay to the serene, idyllic majesty of Maitland.

McMahon has a laconic approach, cracking wise like a mate over a few quiet Sunday beers. His piece about drug dealers in Nimbin kills, though he labours a little long in a bit about modern culinary wankery. Nonetheless, he delivers laugh-worthy material.

If there’s any justice in this world, [Luke Heggie] will be one of our country’s biggest exports.

Keep your eye out for McMahon on the local comedy scene.

\Now it’s time for the headline act, Luke Heggie, who is one of the shining stars of Australian comedy. If there’s any justice in this world, the Sydney comic will be one of our country’s biggest exports.

His brand of irony is intrinsically Aussie but his wordplay and observations
on human fuckery will translate to overseas audiences.

Some halfwits say sarcasm is the lowest form of wit. They’re obviously incorrect. Heggie elevates sarcastic smartarsery to the literary heights of Oscar Wilde, doling out witticisms like it’s his last show on Earth.

The timing is restrained and the tone understated, but the comedian’s delivery is propulsive, his attention to detail stunning. There are jokes within
jokes, throwaway remarks woven into the banter that other comics would savour as
punchlines.

There are times you want to pause him on stage so you can stop to laugh.
Thankfully Newcastle will have another chance to see Heggie and James very soon when they return for Newcastle Comedy Festival, which kicks off this November.

The festival features two huge galas at Newcastle’s Civic Theatre and both comedians will deliver their own solo shows. The Happy Wombat is a key venue in this fine event.