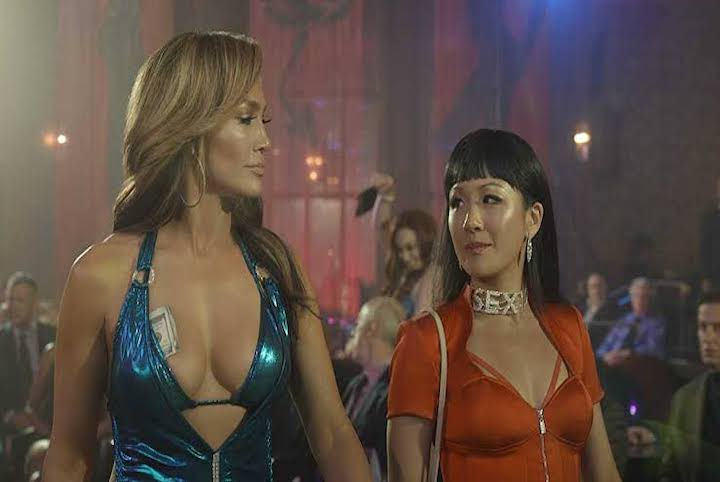 In 2015, Jessica Pressler wrote an article, ‘The Hustlers at Scores’, for New York Magazine. Based on the true story of a group of New York strippers who, also hit hard by the 2008 GFC, had to get creative to make their money.

The story soon went viral and, next thing, we have a movie starring Constance Wu and Jennifer Lopez as the brains behind the scheme that saw the women make millions of dollars by fleecing rich Wall Street types.

The movie opens with Destiny (Wu), on her first night as a stripper at a club where Ramona (Lopez) is currently the Queen. Destiny isn’t new to the job, just the club so, keenly aware she needs to earn $$$ to support not only herself but her aging and in-debt grandmother, she seeks out the advice of the seasoned Ramona.

I just want to say that Lopez looks absolutely phenomenal for a 50-year-old woman. I mean come on! But back to the story.

The women soon become close friends and that brings us to the heart of this movie. It is nothing like you think it’s going to be. This is a movie about that most wonderful and most complicated of relationships, the female friendship.

Their club is frequented by big-spending Wall Street bankers but, after the 2008 Global Financial Crisis, the men stop coming to the club, so the money dries up. The girls need to get creative to earn a living.

The big idea? They drug the men just enough, so they throw caution to the wind, they’re having a great time and keep spending.

What could possibly go wrong?

This isn’t a stripper movie.

Sure, the movie opens with some pretty heady stuff which includes a full pole dancing routine from Lopez, but that’s about it. This is an intensely feminist movie about friendship and sisters doing it for themselves, despite everything life is trying to throw at them.

In fact, men appear in this movie only as props, as people who just move the story along. Don’t get me wrong, they’re not relegated to props nor is this anti-man movie. It’s just not about men or the needs, wants or desires of men.

This movie is about the needs, desires and wants of women. The sisterhood all women should be striving to support. It acknowledges with reverence the ancient Maid, Mother, Crone trilogy and how intertwined the lives of women truly are.

Hustlers is a movie to see with your girlfriends. It’s deeply moving as well as fun and funny. It will lift you up. No really.

Yeah, I know, stripper movies are usually sad little offerings occasionally masquerading as female empowerment movies but, well we all know that’s usually not the case.

With a cast full of amazing actresses, some serious Oscar buzz around Lopez and Wu, a script with more than a few genuinely laugh out loud moments and a true heart and soul, this is one not to miss.