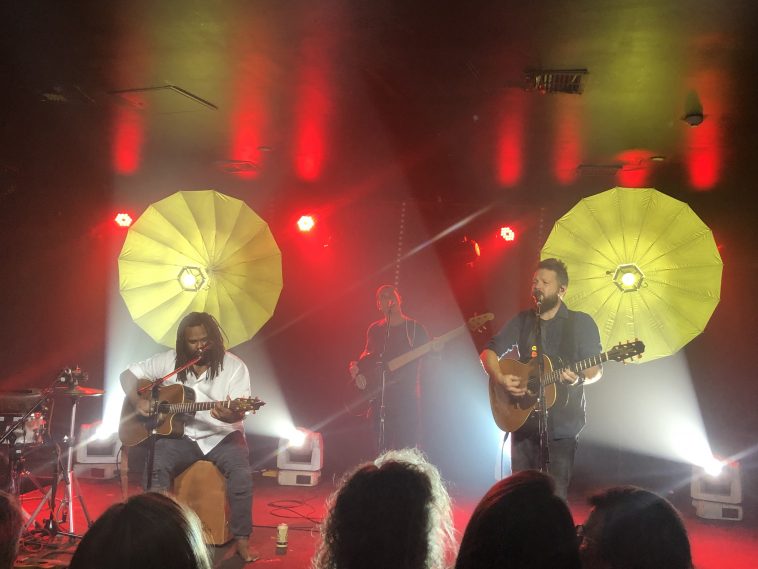 Both artists are riding high on the back of brilliant albums – The Great Divide for Busby Marou and Bobby Alu’s Flow and the night was a showcase of two great acts at the peak of their powers.

Here are five things we took away from the show!

I love to see a more mainstream artist feature the ukulele in their performance and it was refreshing to see that the ukulele is Alu’s instrument of choice.

Bobby offered a simple but impactful combination of ukulele and stomp pedal with the occasional switch to his drum kit featuring a Pātē (traditional Samoan drum).

2. Bobby’s storytelling and chats with the crowd

Highlights included when he joked that the rest of his band didn’t make it to the airport (as he normally performs in a band), he told us the stories of how he came to play the Pātē and the ukulele.

They speak for themselves. It’s a fantastic album and Bobby spoke about the meaning behind Flow- referring to the flow of life. Some things might get in the way but you just gotta keep going, keep your flow.

Double J sums the album the best by saying: “It’s 11 tracks of super-chilled coastal folk, packed with good vibes and unbelievable musicianship. The songwriting is intelligent, the palette of sounds is broad, and the intent is wonderful. Call it what you will – roots, reggae, folk, pop – this is feel-good music.”

4. The just about full house at The Cambo

Jeremy and Tom were joined by bass player Enzo and they presented a great mix of the classics, such as Getaway Car, Got Your Back, Paint My Cup, Over Drinking Over You and newer material from their latest album The Great Divide including the title track from the album – a song dedicated to their late dear friend and producer who struggled with mental illness.

In turn, the album and ‘The Great Divide’ tour is a tribute to their friend.

5. It was a really, really good time

In true Busby Marou style, there were laughs, sing-alongs, great stage presence and a beautiful connection between the band and the audience.

A key treat of the night was when Bobby Alu joined the guys on stage and kicked off Biding My Time.

Bobby released an awesome solo ukulele cover of this song not very long ago and Busby Marou saw it and it confirmed they had to have Alu join them on the tour and perform their song. Bobby started things off beautifully and then Jeremy, Tom and Enzo joined in with the “Newcastle Choir” joining in.