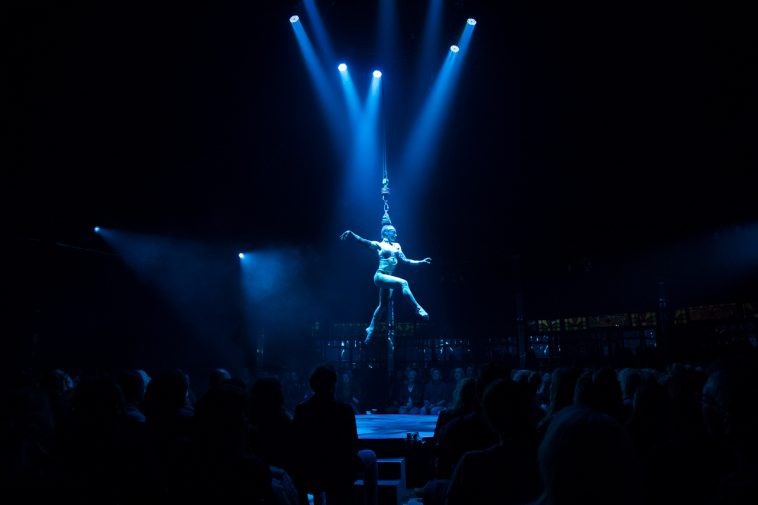 Sashaying on stage in a blindingly glamourous gold sequinned dress, Amy G, the hilarious host of Deluxe Deluxe, declared that this show was going to be ‘f***ing fancy.”

And she wasn’t wrong.

The latest circus cabaret production to hit The Spiegeltent Newcastle is a ribald and high-camp couple of hours that, in the greatest vaudevillian tradition, switches deftly from hilarity to “how did they do that” feats of skill.

It wouldn’t be a circus cabaret without some jaw-dropping feats and Deluxe Deluxe had them in spades. Namely from the ridiculously talented acrobats Penelope Elena and Zoe Marshall who amazed with a gasp-inducing floor and aerial hoop routine and Penelope who seduced the crowd with a routine that involved pancakes, a whole lot of maple syrup and sass.

Also, I didn’t think I would see someone attempt to solve a Rubix Cube puzzle as he and members of the audience stripped him down to his ‘altogether’ but thanks to Louis Biggs, I can now check that off the bucket list.

Other highlights included a whimsical turn from Mexican juggling mastermind Brauny Lopez who did things with a bunch of brightly coloured bowler hats that defied gravity, a gender-bending dance number from Busola, and a ‘palate cleansing’ interlude that saw performers in tongue suits wander throughout the crowd, giving select punters a good licking.

Also not afraid to get the crowd involved in her shenanigans, Amy G kept the laughs coming thick and fast as well as some brilliant musical numbers.

Her humour was matched with her physicality – in particular, a number involving a ukulele, roller skates and the balance of a baby fawn and a rendition of America The Beautiful on kazoo, played in possibly the most ‘imaginative’ fashion imaginable.

While this is definitely not a show for the whole family, Deluxe Deluxe is a must-see cabaret thrill ride and the opulence of the Spiegeltent’s mirrored interior married perfectly with the ‘f***ing fancy’ goings-on onstage.

Deluxe Deluxe is on at Spiegeltent Newcastle until Sunday 16 June. Tickets are selling fast so get yours now