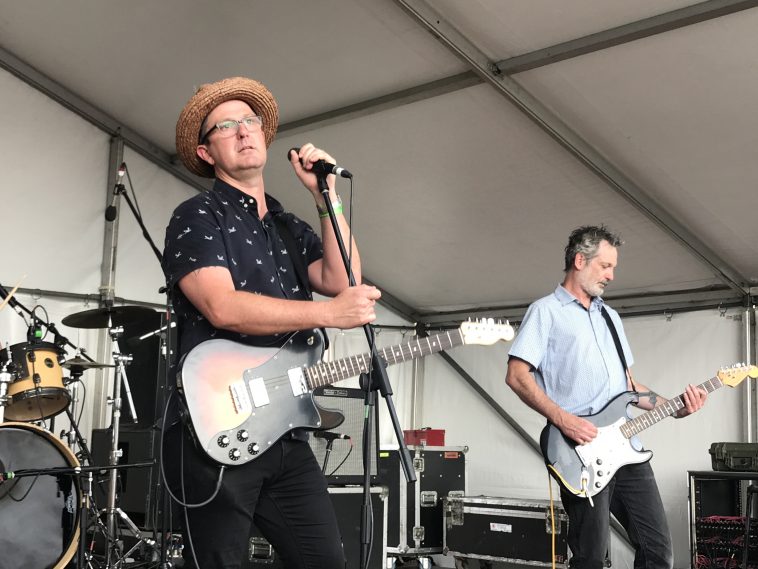 Custard rocking out at Bitter and Twisted Picture Nick Milligan

This year it seems Bitter & Twisted’s two days have truly diverged towards different classes of inmate.

Saturday at Maitland Gaol has become an outing for the drinking age youngins to get some Vitamin D, have a dance and maybe learn the difference between a lager and a gose.

The Sunday of the beer tasting festival rolls at a far more relaxed pace.

The crowd is smaller, the queues are non-existent, there’s lots of families, and the live music draws more on the grey than Triple J.

While the music adds to the vibe, no doubt, Bitter and Twisted’s appeal is still the beer tasting – it’s a helluva lot of fun.

This year’s line-up included some Bitter and Twisted veterans and some fresh faces, nestled together in the historic venue on an especially hot Spring day.

The Sydney brewery has created a beer that sounds bizarre on paper, but is absolutely delicious.

The Freshie is made from real seawater, pinched from its namesake Freshwater beach, and brewed with Tasmanian wild pepper berries and a pinch of coriander.

The result is a memorable, versatile beer.

Another stand-out was Brisbane’s Green Beacon and their blood orange IPA The Whaler – orange and beer just go well together, as anyone that’s ever indulged in a Blue Moon with a cheeky orange wedge will attest.

The Whaler was a winner.

Their taps switched throughout the day, but of note was their Brut?? IPA.

At 7% ABV, one might expect this to be a particularly heady aromatic beer, but the absence of the artificial enzyme during the brewing process leaves it with an incredibly crisp, dry finish.

An IPA for non-IPA drinkers.

There was a lot to like about the musical line-up too.

Currumbin guitar and drums two-piece Burger Joint are your ultimate party act – tight grooves that shift between funk, rock, dub and everything in between.

Tasty covers popped up between their own original gems, like the decidedly sexy baby maker Back to Basics and Swimmin’ in the Alley.

Then there’s the very juicy rocker Best Day Ever about the joy your dog experiences when you take them to the beach.

The Hi-Boys rolled down from Noosa, bringing with them their stompin’ ditties, drawn from the intersection of old-school country and rockabilly.

Then it was time for indie legends Custard, who served up a hefty ladle of fan favourites and new material from their upcoming record.

The sky turned grey, the wind flexed its muscle and droplets descended as Custard played new song Couple Fight rocker 2000 Woman and that most endearing of Aussie indie power-pop tunes, Girls Like That (Don’t Go For Guys Like That).

Another stellar day, Bitter & Twisted keeps its place as a highlight on the Hunter’s social calendar.

Beer, bands and bites in an atmospheric prison?