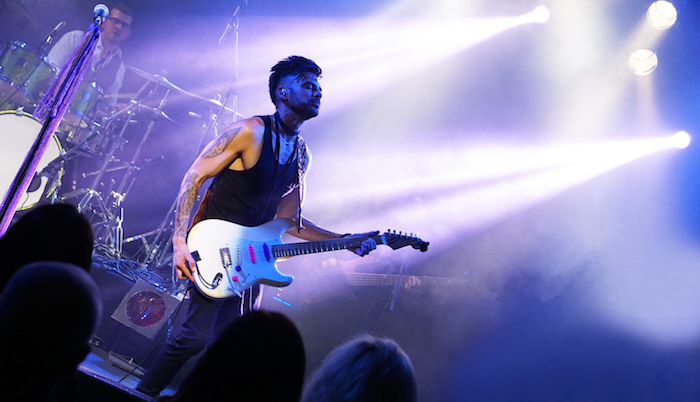 A Prince live show was always a spectacular kaleidoscope of music, lighting, costumes and dancers. It delivered an unrivalled high-energy experience, and for his millions of fans around the globe Price was peerless. Now, we have the chance to re-live this magic when Andrew De Silva brings his PRINCE Purple Revolution show to Belmont 16s on Saturday 16th February 2019.

It truly doesn’t get more legendary than the music of Prince. Prince has written and recorded some of the best songs in music history such as Purple Rain, Cream, 1999, Little Red Corvette, Diamonds & Pearls, I Wanna Be Your Lover among many more. Prince was an icon and when he passed away in 2016, the world mourned and his loss was keenly felt.

Purple Revolution came together after Andrew’s experience with ‘The Life & Music of Marvin Gaye’ shows. He always added Prince songs to his live sets and has recorded quite a few different versions of Prince songs in his career. After getting some of the best musicians together (who also love Prince’s music) and putting on their first show, a real buzz was created so they all decided they had to do more.

Prince had a great impact on De Silva artistically and personally. He says that ‘Prince has been a major influence in everything from his singing, to the guitar riffs to his bass grooves, live performances and production.’

When it comes to an artist performing Prince’s material, Andrew De Silva is the man. From fronting R&B super group CDB in the 90s to fronting the pub rock icons Boom Crash Opera these days, De Silva is an established singer-songwriter within his own right. He won Australia’s Got Talent in 2012 for his incredible vocal style.

Tickets on sale now via www.trybooking.com