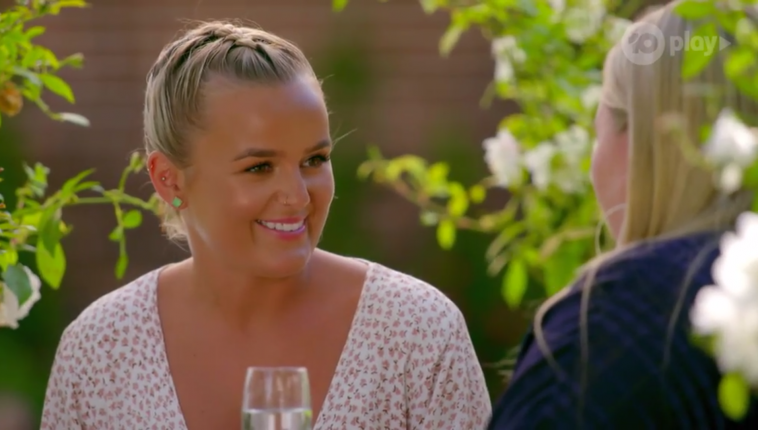 Welcome to our recap of this week’s The Bachelor starring Matt and Our Elly, who according to that chronicle of truth New Idea magazine, have ‘history’ together.

I’m not even going to bother checking this one out because the only less reliable sources of information are the gossips who gather at the primary school gates every morning. I asked them and they too called bullshit.

This week Emma finally gets her single date. And she couldn’t care less.

She can barely contain her giddiness and excitement and Matt seems impressed.

The date involves blindfolds, food and what may have been a bit romantic or sensual in a private setting is quite the opposite on TV.

Matt gives Emma a waveform carved into a piece of wood. It’s geeky and damn cool. She also gets a kiss and a rose.

The next day is a group date. The ladies are reminded they’ve signed contracts and are required to participate in a game that is not only humiliating and stupid, but it’s also confusing.

Basically, they have to stand in order of the qualities they possess that Matt’s looking for. Lots of roses are being given out so Abbie the Viper turns up her take-no-prisoners attitude to 11 and goes in for the kill.

Abbie gets nasty. The other girls are pissed off. Matt seems oblivious. This game serves no other purpose than to ramp up the drama.

Anyway, Abbie wins, nobody claps or gives a shit and they all eat ice cream. I wonder if the ice cream is from Harry from Survivor’s ice cream shop.

I wonder, not for the first time, why we can’t just watch Survivor 5 days a week.

At the cocktail party, Osher announces this is a live rose ceremony meaning Matt’s handing out roses during the night so if you end up without a rose, the tribe has spoken.

How many roses? That’s up to Matt.

At the party, Sogand confronts Abbie. Abbie tries to gaslight Sogand ‘she’s just jealous’ but Sogand isn’t having any of her crap and tell it like it is.

At the end of the night, a rose-less Breanna leaves the mansion.

Next episode we open with Kristan waiting for her single date with Matt. There’s been no card, no giddy acceptance while Abbie rolls her eyes in a corner

I feel cheated but here we are.

Kristan and Matt kayak then do weird things with coffee and water while Kristan talks to Matt in Chinese. Surprising us all, there’s some chemistry between these two.

Back at the mansion, Abbie smugly announces she’s not worried about Kristan because she’s not sexual.

Anyhoo …. Another group date looms for Our Elly, Cassandra, Sogand and Abbie but this time, Matt’s BFF Kate is there.

I instantly like Kate and think she’ll see through Viper Abbie and set our boy Matt straight. As an extra surprise the four ladies chosen will each spend time with their own BFF’s!

Abbie’s sister shows up and Abbie’s OTT thrilled. What, no girlfriends Abbie?

All the ladies chat with Kate and Abbie lies about wanting marriage and babies. Then she lies again. Kate’s onto her!

It’s Sogand’s turn and she tells Kate she thinks Abbie isn’t here for the right reasons.

Kate suspects as much and dutifully tells Matt. What a legend BFF.

Matt listens and is shocked. “It’s a bit of a bombshell’ he tells us.

We’re all pleased Matt’s thinking with his brain and count down the minutes till Abbie is gone.

‘But I know what I have with Abbie’ Matt’s penis announces.

But Our Elly walks away with the rose because Kate correctly surmises, she is adorable, and Matt should marry her immediately and bring her to live with them all in Melbourne.

At the cocktail party, Matt pulls Helena aside for a full- on pash session. She’s thrilled and he looks like a zombie after a huge feed.

Yeah that’s great and all but I want to see Abbie get thrown out.

There’s more drama at the party but it’s just more of the same Abbie bullshit. Here’s a link to the video of Abbie trying to talk her way out of her web of lies.

However, Abbie finally realises she might be going home. We all snigger and wait and watch as Sogand crows how happy she is her plan worked.

The rose ceremony takes place, the dramatic music thunders, we all watch and wait for Abbie’s meltdown…..but it’s not to be.

Next week, Our Elly has another single date with Matt and it’s Mary’s turn to dob. But it’s not Abbie, it’s Rachel who, it seems, fancies one of the crew.

Poor Matt, does anybody wanna have his babies?