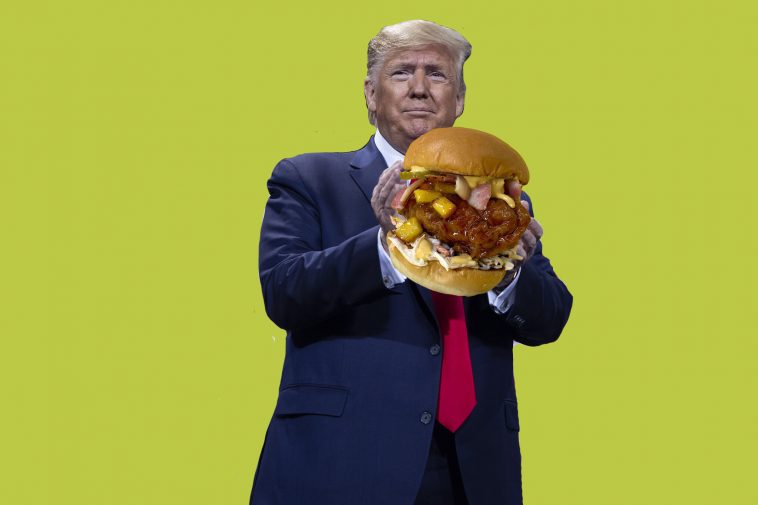 Local kings of the novelty burger, Rascal have done it again. And this time around they’ve got US President Donald Trump fair in their culinary sights.

Yep, that’s right, this week’s burger special at the Newcastle and Charlestown eatery takes a not-so-subtle dig at the Donald’s recent impeachment dramas.

A burger fit for the orange one himself, no doubt!

“Despite a fanciful state of the union, it’s only his complexion looking ‘peachy’,” Rascal said in announcing the burger to social media this week.

It seems the sweet and savoury combo is a hit with one eager diner commenting: “Dayuuum… that’s a menu keeper,” while another chimed in with an equally enthusiastic: “liquid cheese is lyfe!”

We reckon the Donald, who is a famous fast food hound, should swap the slings and arrows of Capitol Hill for the burger splendour of Newcastle and get one of these concoctions into his Presidential gob toot sweet.

This isn’t the first time Rascal has gone political with their creations either, with previous burger specials poking timely fun at sports rorts enthusiast Bridget McKenzie and Scott “The Scourge of Engadine” Morrison’s handling of the Australian bushfire crisis.

Rascal is located at 1/266 King St, Newcastle AND The Corner Precinct, Charlestown Square.

ALSO ON NEWCASTLE LIVE
SAVE THE DATE: British India bring the rock back to the Bay
DATE NIGHT: Your guide to big-screen fare this Valentine’s Day
A who’s who of Newy music throw hats in the ring for Wicko bushfire bash!
ONWARD AND UPWARD: Ben Leece returns to The Stag to celebrate 7″ release