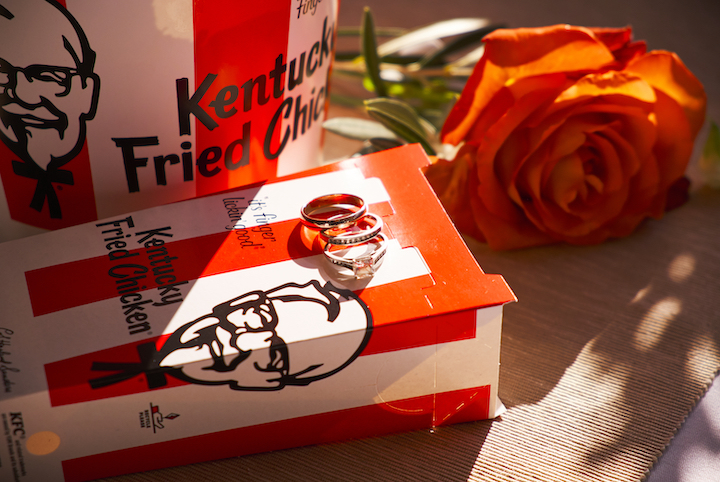 Does your dream wedding include lashings of fried chicken, potato and gravy and nuggets?

Well, you’re in luck because KFC is branching out into the wedding business!

That’s right, the fried chicken purveyor announced on Wednesday that it would be offering six loved up chicken fancier couples the chance to have their very own Colonel-inspired nuptials.

Aside from being able to eat as much fried chicken as you can handle from the KFC food truck on the big day, the bride and groom will also get a KFC-themed celebrant to make sure it’s all legal like, a KFC photo booth, custom KFC buckets and live entertainment that we can only assume is to include the Chicken Dance.

“KFC is all about living your best life and we were flattered that so many of our fans are showing that Aussie larrikin spirit by asking us to be a part of their big day,” KFC Australia managing director Nikki Lawson said.

“Over the years we’ve seen some amazing Facebook comments and have heard of some incredible proposals from fans taking place in our restaurants in Australia and around the world.

“Seeing these we thought bucket, let’s create a KFC Wedding service! We think it’s important that this isn’t just a one-off affair and that as many of our fans have the chance to get a KFC Wedding – so we’re making this available for eight months as a genuine service for anyone living in Australia.”

Loved-up KFC fans need to lodge an application explaining in 200 words or less why they want an ultimate KFC wedding. Winners will be judged on originality, creative merit, and independent expression.

The KFC wedding calendar will be filled right through from October to May 2020 so get those applications in here.