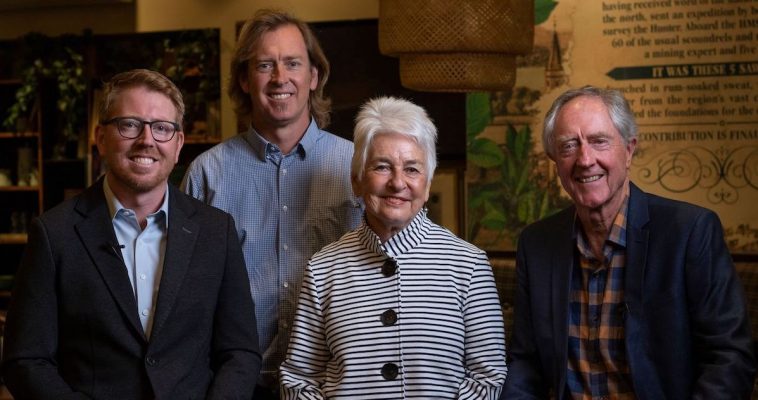 Chris Piggott’s parents were in the hotel industry in Sydney but it wasn’t something they wanted for him.

So, a trip across the road to meet the local pharmacist planted a whole new seed which was to grow into the now-iconic Piggott’s Pharmacy.

In 2020, just over 50 years later, the Piggott family is celebrating a significant milestone for a business that has grown to include most members of the family.

Chris met his wife, Shirley, while both were studying Pharmacy in Sydney. After graduation, Shirley became the manager of the first pharmacy within the University of NSW.

The Piggotts were invited to Newcastle by a cousin to look at a small pharmacy for sale in Kotara.

Chris added that, with a bit of help and financial advice from his grandfather, they were able to buy it.

“We drove up in a Mini Minor and our friend had a milk truck so he helped us move all our worldly goods up,” Chris said. “We lived above the pharmacy for the first three years.”

Shirley admitted it was busy, “we had our first baby just three weeks after moving in,” she said.

“It was right before Christmas and we had a lot to learn about both running a business and raising a baby. I would run up and down the stairs in between feeds to help with prescribing!”

The Piggotts still own that pharmacy, now known as Blackbutt Pharmacy, and their business has expanded over the decades, alongside Chris’s work to help bring Pharmacy Studies to the University of Newcastle in 2004.

Chris said that pharmacy as an industry that has changed immensely over the last 50 years.

“In 1970, you only bought your toothpaste from a pharmacy and we used to actually make the medicines – doctors would write prescriptions with the ingredients and we would make them ” he said.

Chris and Shirley’s love of their profession has obviously rubbed off on their family. Three of the four Piggott children and one daughter-in-law are also pharmacists and working within the broader business.

It hasn’t always been plain sailing and the family has faced a few challenges. Some we’re all familiar with – the 1974 Sygna storm and 1989 earthquake, for example.

But some are a little different.

An experienced sailor, Chris was a crew member during the disastrous 1998 Sydney to Hobart Yacht Race in which six people died.

Chris’s son, Anthony – also a stellar local pharmacist – has quite the story to tell about being kidnapped in South America.

Anthony Piggott said there are exciting times ahead.

“The changes that we’re seeing include more consumer services such as vaccinations, medicine reviews with customers, and wound care clinics,” he said.

“In the UK, we’re seeing a move to pharmacists prescribing, so that will be interesting to watch in Australia.”

Whatever the future holds for Newcastle, Piggott’s Pharmacy will continue to care for the community across their six outlets: