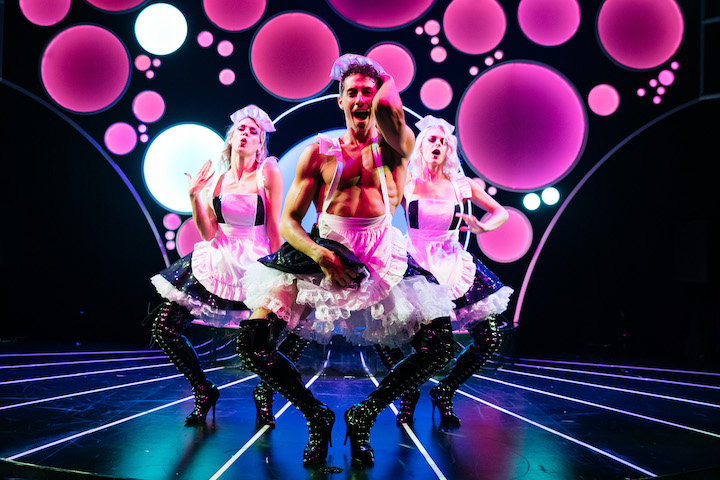 Now in its fourth season, Spiegeltent Newcastle 2020 is shaping up to be the biggest and best yet with the return of the knee-slappingly camp circus cabaret Blanc de Blanc Encore. Picture: Daniel Boud

Are you ready to party, Newcastle? Well, you’d better be because The Spiegeltent is rolling back into town!

Yep, that’s right. Newy’s fave pop-up venue will be pitching its tent in Civic Park from Thursday 26 March to Thursday 16 April and it will be filled with more talent than you can poke a stick at!

Now in its fourth season, Spiegeltent Newcastle 2020 is shaping up to be the biggest and best yet with the return of the knee-slappingly hilarious and risqué circus cabaret Blanc de Blanc Encore.

Blanc de Blanc Encore resurrects the champagne-soaked bacchanal of the original, inviting the audience to pop a bottle and indulge their senses in a hedonistic swirl of live jazz, thrilling circus tricks, side-splitting comedy and death-defying acrobatics.

“Tickets to Blanc de Blanc Encore have been flying since we announced its Newcastle season in July, ” the Spiegeltent and Strut & Fret director Scott Maidment said.

“Some fans of the original Blanc de Blanc missed out on tickets to Blanc de Blanc Encore in other cities, so if you want to catch it in Newcastle, it would be wise to get in quick.”

If that wasn’t enough, the rest of the program dropped this week and with the likes of comedy legends Judith Lucy and Joel Creasey leading the chuckle charge, you know you’re in for some serious hilarity come 2020.

Joel will be bringing his show Messy Bitch to the stage while Judith will reflect on her history with the male of the species in Judith Lucy Vs Men.

The incomparable Effie will also be bringing her show Love Me Tinder to the Spiegeltent stage while Australia’s favourite crim Chopper (aka Heath Franklin) will be telling Newcastle and the rest of the world to harden the f**k up with his no-nonsense show Welcome The Silencer.

Also, comedian Anne Edmonds, who you may know from the Channel Ten show Have You Been Paying Attention?, the emotionally unstable fashion expert Helen Bidou or indeed in her own sketch show The Edge Of The Bush on the ABC, will be asking the age-old question What’s Wrong With You?

Returning in 2020 after a bravura turn this year is Australia’s Queen of cabaret, the iconic Carlotta who will regale audiences with her brilliant show I’m Not Dead Yet, while Michael Bublé’s fans will be in musical heaven with the three-man tribute, direct from New York, Shades Of Bublé.

She’s been described as ‘a ballsier Adele’ and ‘Janis Joplin reincarnate’ and Irish singer SON (aka Susan O’Neil) will definitely wow Newcastle audiences with her soulful, husky voice in a show that has been dubbed ‘mind-blowing.’

“Audiences are in for a real treat with this program – the calibre of acts is truly
outstanding,” Scott added.

“There’s old favourites and new faces: a line-up of some of the very best comedy, music and cabaret talent Australia, and the world has to offer.”

ALSO ON NEWCASTLE LIVE
HARBOURSIDE HAPPINESS: Earp Distilling Co brings top tipples to Carrodise!
ROCK ON: Exchange Hotel to get $6 million musical makeover
SAVE THE DATE: German retro stoner rockers KADAVAR to melt faces at the Stag in 2020!
WHO LET THE DOGS OUT? PAW Patrol Live! will return to Newcastle in 2020