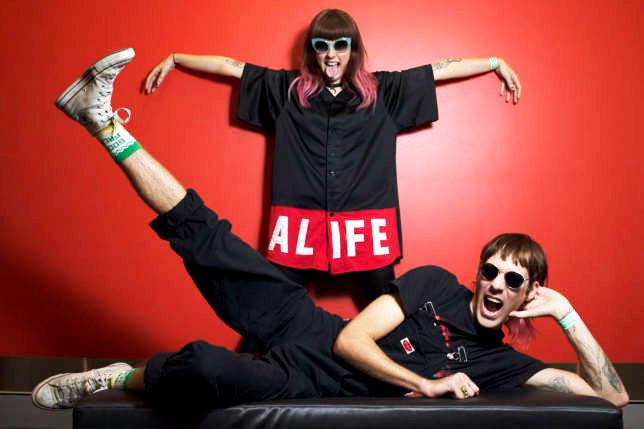 They may now call Melbourne home, but Newcastle will always have a place in the hearts of The Gooch Palms.

That’s why the party punk duo jumped at the chance when they were offered a slot at the upcoming Sound Station Music And Arts Festival.

“There are some great bands on the lineup and it will be exciting to see the new wave coming through.”

Organised by the Newcastle Live Music Taskforce, the festival aims to showcase the breadth of talent that has come out of Newcastle while reaffirming its commitment to the local scene in the face of increased residential development in the CBD, which the taskforce believes is negatively impacting local live music.

“It’s also really encouraging to see the festival has the support of the likes of [State [Member for Newcastle] Tim Crakanthorp,” Leeory said.

“It really saddens me to see the amount of residential development happening in the city – it’s definitely having a negative effect on the culture of Newcastle.”

“I mean, to all those people who move into the city and then complain about the noise…’what’s the point of living in a city if there’s no culture in that city?'”

After cutting their musical teeth in such venues as the Lass, the Cambridge and now-defunct Hunter Street vinyl emporium White’s Records, the band picked up stumps and moved to the US in 2014.

“I mean, to all those people who move into the city and then complain about the noise…’what’s the point of living in a city if there’s no culture in that city?'”

On the Gooch Palms return in 2018, with two albums Novos and Introverted Extroverts under their belt, Leeroy said that he was dismayed at what had become of his hometown particularly with the removal of the rail line.

“I remember driving around Newcastle when we got back and feeling like I wanted to cry,” he said. “Everything seemed so sterile.

“Also you’ve got things like The Palais closing down and becoming a KFC – that’s just so disheartening because that venue gave a place for a 15-year-old me to go and check out some great live bands and now there are no all-ages venues in Newcastle.

“That really needs to be addressed.”

Through it all, though, Leroy maintains that Newcastle always has had a strong music scene – one that continues to thrive despite the hurdles put in front of it.

“There are so many awesome bands in Newcastle – there always has been. Then you’ve got people like Marcus Wright [Big Apache Director, and Live Music Taskforce member] who has been championing live music in Newcastle for decades,” he said.

“Also it’s great to see places like Hiss and Crackle Records in Wallsend giving bands another place to play thanks to regular in-stores. I was stoked to see that our mates the Dune Rats did their record signing event there recently.”

Following their Sound Station performance, the Goochies will be back at The Cambridge in May riding high on the back of their brilliant 2019 release III and the recently released standalone single Great Dividing Rage.

Leeroy said the iconic West End venue was integral to the Gooch Palms story and any chance to hit that stage was always a welcome one.

“The Cambridge is really dear to our heart – Kat and I met there and I’ve been watching bands there for years,’ Leeroy said.

“My guitar and Kat’s boots are actually hanging on the wall – they wanted to celebrate the fact that we sold out two nights at the sidebar, and it’s a huge honour for us.”

This Cambridge show will be bittersweet with the band announcing on social media on Thursday that the upcoming tour would be their last under the Gooch Palms moniker.

“Hey everyone, this is really hard to say but after a lot of discussion and back and forth on the future of the band, we’ve decided that our upcoming tour will be the last time we venture out as The Gooch Palms,” Leeroy and Kat write in a Facebook post.

” We’ve been a band for 10 years, played close to 1000 shows across the world, released some 7″ vinyls, 3 full length albums and some stand alone singles. We’ve both had multiple nervous breakdowns and experienced some devastating lows, but thankfully, overall, mostly dizzying highs! We’ve played with so many amazing bands in so many amazing venues and seen cities and countries we never thought we’d be lucky enough to visit.

“This will be our last tour as The Gooch Palms and we hope you can make it out to send us off! But regardless, thank you all for taking your time to be fans of our weird little band.

“Nothing we ever did as The Gooch Palms would have been possible without you.”

Catch The Gooch Palms at Sound Station Music And Arts Festival at the Station, Newcastle on Saturday 4 April.