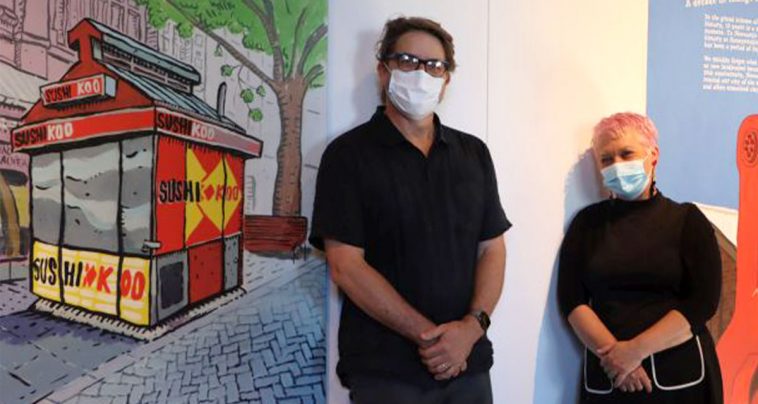 More than 20 works by local artist Trevor Dickinson will be on show to celebrate 10 years of the Newcastle Museum’s operation in the former Railway Workshops at Honeysuckle.

Aptly titled, Oh yeah, I forgot about that: A decade of change seen through the eyes of Mr Trevor Dickinson, the exhibition is now open to the public from today until 27 February 2022.

Newcastle Museum Director Julie Baird said Dickinson’s art had played an influential role in establishing the museum’s visual character at the Honeysuckle site, making him a natural fit for this anniversary show.

“Trevor’s colourful, larger-than-life murals have formed an intrinsic part of the Museum and its surrounds since we opened the doors here in August 2011,” Julie said.

“This included commissioning him to create our quirky photo walls in Museum Park, which not only liven up the landscape but also create a way for locals to become part of the Museum’s story by snapping a selfie and sharing it with our Facebook page.”

The Museum also commissioned Trevor Dickinson to create two new artworks that captured something constant and something that has changed within the Museum.

“These are being seen for the first time in this exhibition,” Julie said.

“We quickly forget what has changed in our city as new landscapes become normal. For our 10th anniversary, Newcastle Museum wanted to remind people of the alterations to our normal and often unnoticed cityscape.

“Through the artwork chosen for this exhibition, Trevor presents his own view of Newcastle, curating the identity of the natural landscape in the same way we curate its history, highlighting the specialness within the ordinary to present a personal visual portrait of the city during a time of great change.”