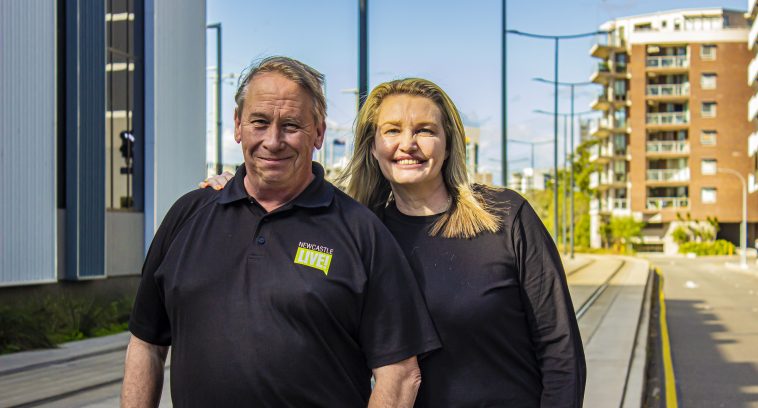 For Tracy McKelligott, the motivating factor behind stepping into the Newcastle Live Radio studio every day to host Newcastle in The Morning is a desire to make a difference.

Tracy, who has been in the chair since the online streaming station launched back in April (and the testing phase which began in November 2020) said she derives great joy in giving local people a voice, in an ever-shrinking national media landscape where localism often comes up second-best.

“I do this because I really want to make a difference to this city,” Tracy told Newcastle Live.

“The main reason I get out of bed to do this is that I love the fact that I’m able to give a voice to those people who don’t have a voice.”

The magazine-style program covers all the stories that affect Novocastrians as well as flying the flag for all the great things happening in Newcastle and the Hunter Valley – be it covering our flourishing local theatre scene each Monday or chatting about the grassroots Newcastle Rugby League.

While lighthearted and conversational in tone, especially in ex-pat Novocastrian Zac Garred’s weekly dispatches from the US of A, Tracy is also not afraid to tackle the big news of the day and holding to account the policy-makers and thought leaders whose decisions directly affect the lives of the people of the Hunter.

Just so long as it’s local.

“I want to hold people to account. The things that we have been promised, I want to be delivered. I have such a strong faith and belief in Newcastle and the Hunter and I think for so long we have been ignored.

“For example, the amount of money that is coming out of our Port that is coming back into Newcastle is just not acceptable. We need a convention centre – we’ve been talking about it for 20 years and we still don’t have it. The sports precinct, whats happening there? I want answers on what’s happening with this stuff and that’s what I see my job to be.”

Striking that balance between being entertaining and informative can be a tough one, but for Tracy, the secret lies in relatablity to the audience.

“It can be difficult to find that balance,” Tracy said.

“Now that I’ve been in the seat since November, I think I’ve found my groove. I think that giving the listener the real Tracy is how I can best inform and entertain.

“It’s a very vulnerable place to be in so it took me a little while to be able to show the listener who that person was and not put on the radio voice and not be what I think people expect me to be.”

Of course, Tracy was quick to admit that Newcastle in The Morning was definitely not a one-woman show, with Producer and Newcastle Live Radio News Director Michael Blaxland bringing his decades of journalism experience, both on radio and in print, to proceedings.

“I couldn’t do what I do without Michael,” Tracy said.

“He has a great ability to find those stories that resonate, and that’s a vital part of what we do. We have been friends for so long and it all just feels natural. I feel so lucky that I’ve got him here. I often hear him in my ear guiding me.”

Michael, who loves the immediacy that radio affords, is also quite enamoured with this fair city and, as such, wants to sing its praises from the rooftops and advocate for more attention to be placed on our part of the world at both a State and Federal level.

“The best thing about living in Newcastle is that it’s small enough to be nice but large enough to be convenient,” Michael said.

“We’ve got great beaches, the vineyards on our doorstep, and it’s actually comparatively quick to get to places.

“One of the important things for us here is to actually fly the flag for Newcastle because we get forgotten quite often so there’s an opportunity for us to be able to promote Newcastle as a fabulous place but also to say: ‘why don’t we get serious about having international flights coming here? Why don’t we get serious about having decent transport routes,’ because Newcastle is just as important as the rest of NSW.”