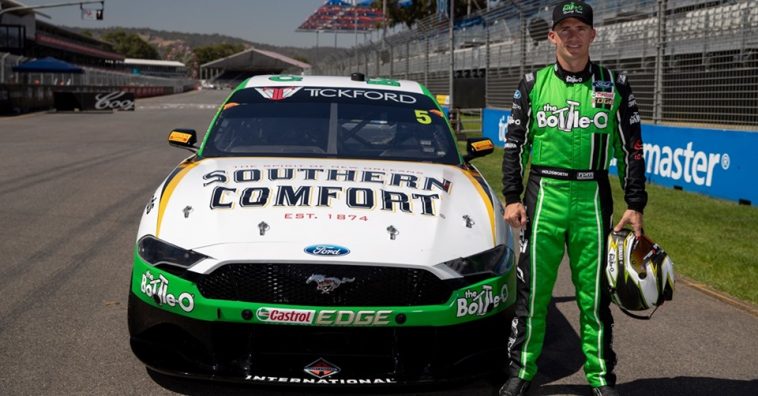 The Bottle-O Wickham will be the place to be for Supercar fans wanting to meet one of their heroes ahead of the big race.

On Thursday 21st November between 6.30pm and 7.30pm you’ll have the opportunity to meet the driver of The Bottle-O Race team, Lee Holdsworth. Grab an autograph, take a photo and check out the Bottle-O Mustang Replica car as well as some of the in-store promotions that could land you awesome prizes such as tickets to the Newcastle 500 race!

This is Lee’s 14th season of Supercars but it is his inaugural year taking over from Mark Winterbottom as driver of The Bottle-O’s Ford Mustang for the Tickford racing team. He is currently in position 9 of the Virgin Australia Supercars Championship.

Lee’s career began when he was seven, racing karts and Commodore Cup before progressing to the Dunlop Super 2 Series in 2004. In that class he caught the eye of Garry Rogers, getting an enduro drive in 2005 and full-time opportunity in ’06, taking his first podium mid-year at Oran Park. One year later at the Sydney circuit, Holdsworth claimed his maiden Supercars race win, taking a second victory with GRM at Homebush in 2010.

Lee will be signing posters and taking photos with fans before the final race of the year in The Bottle-O Ford Mustang at the Newcastle 500.

Head into The Bottle-O at Wickham for this exciting signing event. There will be Southern Comfort and Fireball Whisky tastings as well as merchandise giveaways in-store.

Plus shop for your LAST chance to win 1 of 2 Hot Lap Packs including a hot lap with Lee Holdsworth, general admission ticket to the Newcastle 500 plus a pit tour and grid walk. Simply spend $30 in-store to enter. Winners will be drawn at the store signing event.

Purchase a carton of Coopers XPA in-store and you could win a 3 day double pass, or spend $25 on any Woodstock product for a chance to win 1 of 4 Supercars Coolerbag seats! There’s also a Monster Energy replica car bonnet up for grabs plus Monster Energy gear and heaps more general admission tickets to the Newcastle 500. See in-store for details and terms and conditions.

For your chance to meet Lee Holdsworth and grab a free signed poster come to The Bottle-O at Wickham, 6 Throsby Street Wickham from 6.30pm – 7.30pm on Thursday 21st November.