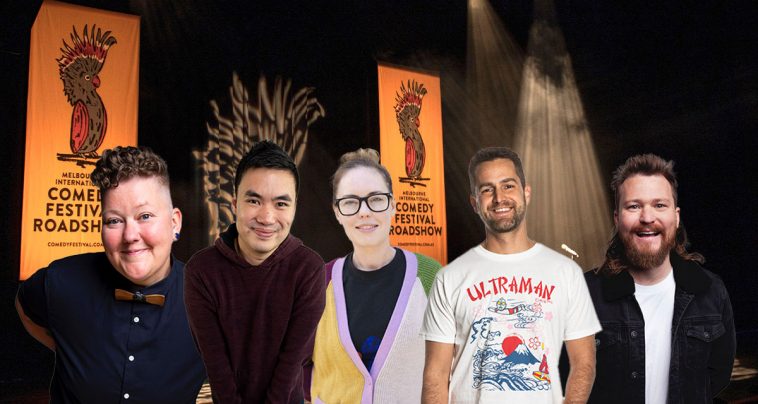 Strap yourself in Cessnock! The Melbourne International Comedy Festival Roadshow is hitting the highway for a show at Cessnock Performing Arts Centre to kick off the June long weekend, and you don’t wanna miss it.

This year’s show features stand-up, sketch, satire, silliness and song which is designed to satisfy all your post-pandemic comedy cravings.

For the past 24 years, the Roadshow has delivered an all killer, no filler line-up of Australian stars and talented comedy newcomers direct from the annual Melbourne International Comedy Festival, and this year is no exception.

The Melbourne International Comedy Festival Roadshow will hit the stage at Cessnock Performing Arts Centre on Thursday, 9 June at 8 pm. Tickets are on sale now – Check out the full lineup below.

Kirsty wins hearts everywhere she goes with her upbeat and relatable brand of comedy that is often described as playful, light-hearted and fun. A gifted storyteller, she has a natural ability for turning the mundane into the hilarious and has quickly become one of the most popular Australian comedians in the industry. You may recognise her as a regular guest on ABC Radio, from her appearances on TV shows such as Tonightly with Tom Ballard, How To Stay Married, and Metrosexual, or as the host of the incredibly successful lockdown hit Kirsty Webeck’s Zoom Comedy Hour. In 2022 Kirsty will be touring the country with her brand new stand up show Silver Linings.

Self-identifying bogan genius Brett Blake is a whip-smart, high-spirited stand up who has performed widely across Australia and the UK. A regular sell-out at the Melbourne International Comedy and Edinburgh Fringe Festivals, Brett also starred on Common Sense for Network 10, has a hand in Melbourne’s Comedy at Coopers Inn, is a regular visitor to The Little Dum Dum Club, shared the reins on Worst First Dates podcast with Kelly Fastuca and currently co-hosts the bonkers double-dare fiesta that is Flat Stick with Nick Capper.

National RAW Comedy Runner Up Patrick is a soft-spoken Chinese-Australian comedian and proud IT nerd. When he was ten, he used to put on one-kid shows with stuffed toys for his two younger sisters. They got a few laughs, and it inspired him to do comedy. In 2022 Patrick was hand-picked by the Melbourne Comedy Festival to appear in The Comedy Zone, a showcase of the best up-and-coming talent from around the country. This is Patrick’s first tour with the Comedy Festival Roadshow.

Say ‘hola’ to your new favourite comedian. Hailing from Venezuela, Ivan Aristeguieta, is one funny immigrant. Since moving here 10 years ago, he loves living in the lucky country and reminding us how weird and funny we are. He has appeared on Have You Been Paying Attention, Hughesy We Have a Problem and a regular on the Melbourne Comedy Festival Roadshow. In 2021, he reached the pinnacle of Aussie comedy, when his show Piñata was nominated for Most Outstanding Show at the Melbourne International Comedy Festival. In 2022 he will be touring his new show, Happy Papi, around the country

Steph Broadbridge is a regular host and headliner at all the Sydney comedy clubs having performed alongside Ronny Chieng, Jimeoin, Matt Okine and Dave Hughes. She has performed at Splendour in the Grass as well as Sydney and Melbourne Comedy Festivals and the Sydney Fringe Festival. Steph was a Raw National Finalist in 2019 and her first solo show was nominated and shortlisted for ‘Best Comedy’ at Sydney Fringe Festival and nominated for ‘Best Newcomer at Melbourne International Comedy Festival.