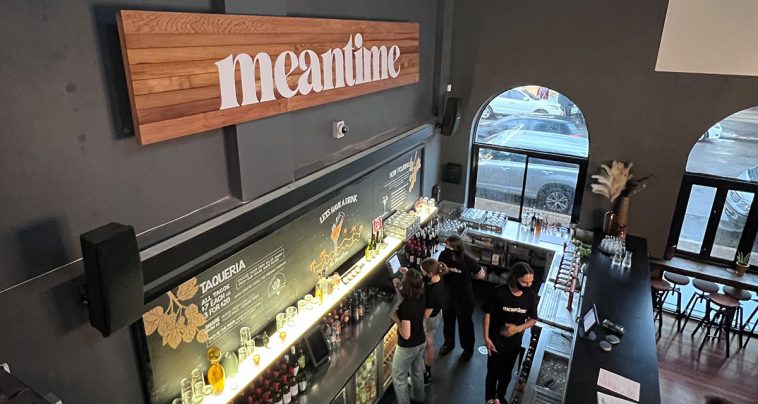 Meantime is the newest venue to hit Beaumont Street in Hamilton, and last night we got a cheeky sneak peek before its official opening tonight.

Taking over the space that was occupied by the short-lived Corset Bar & Supper Club, Meantime offers a welcoming urban space complete with an in-house microbrewery.

Beyond the stylish new fit-out, the real drawcards here are the house-brewed beer and the Taqueria.

And while the first batch of Meantime’s house beer is currently brewing to be ready for summer the Taqueria now is serving up some of the most traditional street tacos you’ll find outside of Mexico.

The Meantime chef has designed a menu of tacos and sides that are all cooked over a real wood fire which makes for the perfect mouthfuls of flavour to accompany the offerings over the bar.

And while the house brews are yet to hit the taps, Meantime is serving up some of the owner’s favourite beers from around the country, including Crankshaft, Black Hops and Young Henrys. The drinks list also features a range of cocktails, spirits and wines that pair perfectly with their tasty tacos.

Meantime will throw open its doors for the first time to the public tonight. You can find it at 104 Beaumont Street in Hamilton. Visit meantime.com.au to find out more.