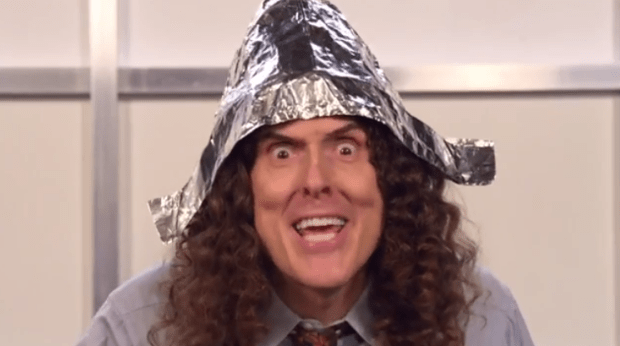 From a faked moon landing to 5G causing coronavirus, there’s no denying that we humans love a good conspiracy theory.

The dark corners of the internet are literally full of people who are only too happy to tell you the earth is flat, forests don’t exist or that the moon is fake.

So throw on the tin-foil hat and jump down the rabbit hole of kooky conspiracy theories that people actually believe!

1. The world is run by shape-shifting reptilian aliens

While some in the tin foil hat brigade will tell you that the world is run by a secret cadre known as the Illuminati, famed conspiracy theorist David Icke goes one futher.

Reptiles. Shape-shifting reptiles, no less. Oh and they drink blood, too!

Icke’s theory posits that a race of 15-foot tall reptilian aliens came to earth thousands of years ago and have been slowly taking over governments and the entertainment industry with the purpose of enslaving the human race.

According to Icke, noted members of this reptilian elite include the British Royal Family, nearly all US presidents and even pop stars like Katy Perry and Justin Beiber!

Shockingly though, according to a 2013 poll conducted by Public Policy Polling, revealed that 4 percent of registered American voters reckon he is right!

2. Saddam Hussein had a Stargate

You remember how we were told that the 2003 US invasion of Iraq was due to weapons of mass destruction? Well it turns out the REAL reason is a heck of a lot kookier.

And no, it’s not about the oil.

It turns out, according to Aussie “extraterrestrial politics” expert Michael Salla, that the real reason for the invasion was that Saddam Hussein was in possession of a Stargate -you know, like in the 1994 sci-fi flick and subsequent TV series.

Yep, that moustachioed despot apparently had the ability to transport himself to other dimensions and Bush, Rumsfeld, Cheney and Powell only wanted to prevent him from bringing back all manner of superior alien tech.

There’s also some guff about former US presidents Richard Nixon and Ronald Regan orchestrating the whole shebang by communicating with King via secret codes hidden in newspapers and magazines.

4. Barack Obama can control the weather

While he was unable to get his original vision for “Obamacare” past the US senate former president Barack Obama DID have control over something much further reaching.

Yep, that’s right. Apparently, word on the street is that Obama was in possession of some kind of fantabulous weather machine that allowed him to create all types of climate maladies to divert attention away from scandals coming out of the White House.

Infamous kook Alex Jones goes one step further claiming a host of western governments have been ” has been doing this since the 90s but are instead adding radioactive isotopes to jet fuel,” to achieve the same goal. jet fuel a whole host of radioactive isotopes”

This from the guy who also reckons that the US government is putting chemicals in the water that is turning frogs gay!