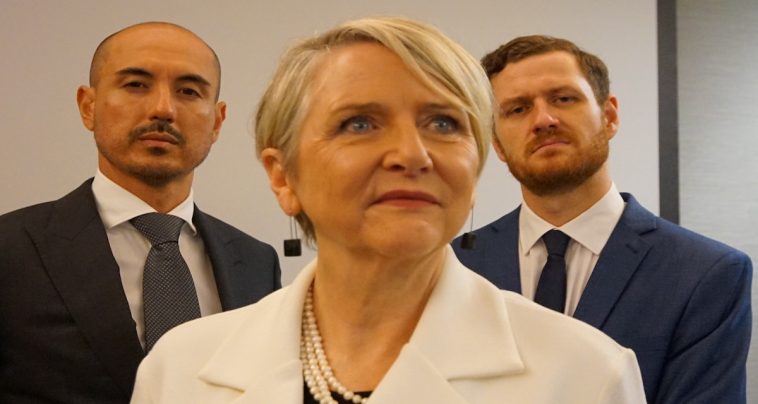 Elliot Leeds is dead. Or is he? This is the question at the centre of the science fiction play, Two Point Oh, which opens at the Civic Playhouse later this month.

American playwright Jeffrey Jackson’s original work was first produced in the US ten years ago and local theatre company, Knock and Run Theatre are bringing it to Australia for the first time.

Audiences will be confronted by the potential moral dilemmas of launching head-first into the social media-led rabbit hole we all seem to be freely embracing post-COVID and challenged to consider where this technological reliance may lead our collective future.

Director and producer James Chapman said Two Point Oh was the most ambitious play the company has tackled.

“Elliot performs in real time, but he is in a room off stage and the other actors and audience only see him displayed on screens at the rear of the set. It’s a tremendous technical and performative challenge and certainly something different for local audiences.

“I don’t think a sci-fi play has ever been staged in Newcastle and I definitely can’t recall a play incorporating this level of technology. It’s easily the most ambitious thing we’ve attempted – it feels like the last six years of our company’s evolution has been leading to this.”

The reason the main character never appears on stage is because, at the start of the play, Elliott Leeds dies in a plane crash. Or does he? A technological genius, before his demise, Elliot created a perfect digital recreation of himself, which is soon introduced to the story, as he reappears on screen as a digital version of himself.

“Elliot essentially brings himself back from the dead and the story which unfolds, deals with the moral and legal fallout of his actions, posing a host of questions in our post-COVID world,” James said.

“Elliot Leeds is Mark Zuckerberg, Steve Jobs and Elon Musk all rolled into one and, in this production is brought (back) to life by Ben Louttit. Ben is such a meticulous, hardworking actor, he has committed 100% to the concept of performing to camera in a totally different space to the rest of the cast.