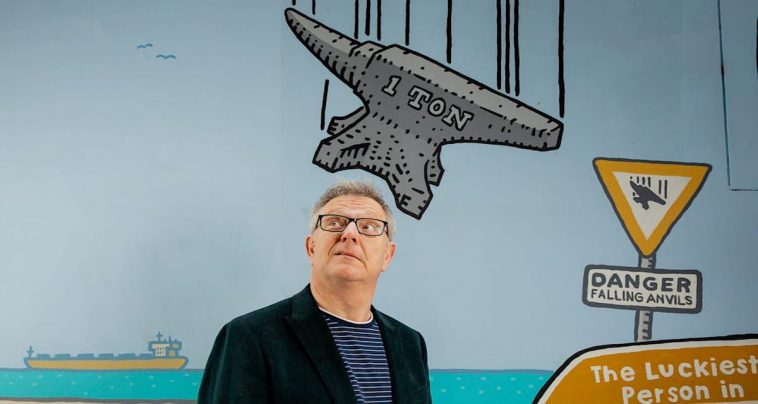 When Jonathan Biggins was approached to be the ambassador for the Newcastle Fringe Festival, he jumped at the chance. While he was impressed with the inclusive, celebratory and affirming nature of this year’s program, it is what the festival represents that really sealed the deal.

“I really like the idea of a festival that allows anyone to say or do anything,” Jonathan told Newcastle Live.

“It’s an artist-curated festival and it’s saying that artists have the responsibility and the discretion of their judgement to know what’s acceptable to say and what’s not.”

The Newcastle-born satirist, actor, author, writer, and director added that in a world that is becoming increasingly concerned with political correctness’, fringe festivals represent one of the last bastions of free expression.

“I also think if anywhere in the world can be a place for dangerous ideas it’s a fringe festival,” he said. “If we sort of tidy ourselves away into this thing of “oh you’re not allowed to say that, you might offend someone,” well then I think we’re failing as artists. Particularly in my job as a satarist, you’re supposed to offend everybody.

“I just like the idea of a fringe festival that is true to the notion of being a dangerous place that gives artists a responsibility and says we’ll let the audiences have the intelligence to decide whether what you’re saying is agreeable, interesting, provocative, dangerous, unacceptable or whatever.

“We’re not talking about letting the Proud Boys get up on stage – it’s all within the laws of slander, defamation, racial vilification and such which is fine – that’s the framework you work in – but then don’t put another censorship framework on top of that.”

I just like the idea of a fringe festival that is true to the notion of being a dangerous place that gives artists a responsibility and says we’ll let the audiences have the intelligence to decide whether what you’re saying is agreeable, interesting, provocative, dangerous, unacceptable or whatever.

Praising the inclusive, celebratory and affirming nature of this year’s program, Jonathan said that the Fringe was also an apt metaphor for our fair city.

“If you look at the program, it’s such a diverse program that goes right across the spectrum. Every voice that maybe hasn’t been heard before is getting a chance, it welcomes anyone of any colour, creed, sexuality, gender orientation and that’s a great thing to have,” he said.

“The Fringe Festival is, in many ways, an ideal metaphor for Newcastle because it often feels itself to be beyond the fringe – just outside the mainstream.”

“Newcastle is the sort of place where you can have a go – not in the Scott Morrison way – but you have an opportunity because you can actually put a show on and if 50 people turn up, that’s alright you don’t have to get thousands to cover your costs. So I think the Fringe Festival is a great way to explaining Newcastle, not the specific program but the idea of it.”

It’s also a metaphor for the changing face of Newcastle, something which Jonathan said was a constant surprise with each visit back home.

“I was at the corner of Beaumont Street and Maitland Road just over Christmas and I thought my god I could be in the East Village of New York,” he laughed. “There were more hipsters per square inch than I’ve ever seen anywhere.”

The Newcastle Fringe Festival is on from Wednesday 17 March to Sunday 21 March. Head here for more information and a full program.