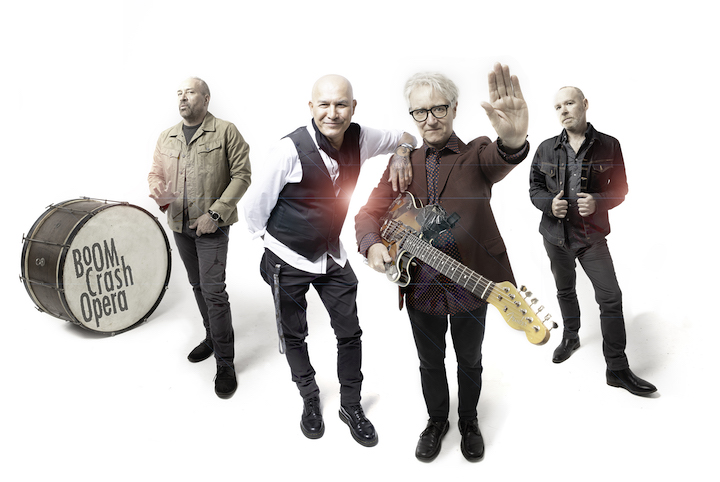 Dale Ryder, frontman for seminal Aussie pop-rockers Boom Crash Opera will reunite with the band for a massive show at the Cambridge this weekend.

The eight-show tour will be a celebration of the 30th anniversary of Boom Crash Opera’s second album These Here Are Crazy Times and will also be the first time Dale has stepped onstage with the band since his departure back in 2016.

Ryder will join Peter ‘Maz’ Maslen, Peter Farnan and John Favaro for the November tour and said he couldn’t wait to get back on sttge with Boom Crash Opera.

“Well, the stars have aligned themselves and I find myself re-joining my old band,” he said.

“Nothing sinister, just simple happenstance and once again just like that, I’m singing my favourite songs with my favourite band again. For the last three years I’ve watched Andrew De Silva perform with Boom Crash Opera and I’ve admired his professionalism and talent.

“I did envy him sometimes because I did miss BCO sometimes. So I’m very excited to be back and do it all again.”

Upon its release back in October 1999, These Here Are Crazy Times cut a swathe through the Aussie rock scene and made serious inroads for the band in the tough-to-crack North American market.

The album was certified Gold in Australia thanks to the plethora of hits contained within, including Dancing In The Storm, Onion Skin, Get Out Of The House and The Best Thing.

These songs all formed part of a vibrant moment in Radio starting the late 1980’s, when Aussie music dominated and Boom Crash Opera was the pioneer of cultivating powerfully catchy and infectious tunes

Joining Boom Crash Opera for this auspicious occasion will be ’80s post-punk legends The Machinations.

Responsible for such hits as Pressure Sway, No Say In It and Do To You The Machinations became one of the most exciting live bands of the era.

Catch Boom Crash Opera and the Machinations at The Cambridge Hotel on Sunday 17 November. Get your tickets here.