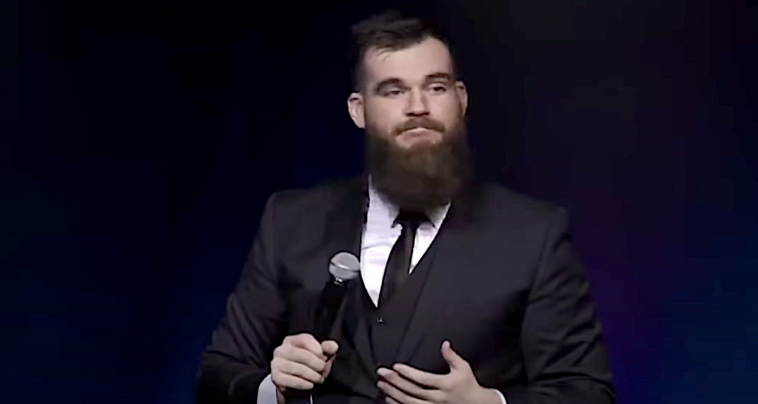 He’s the hirsute Newcastle comedian and YouTuber who has never been afraid of courting controversy.

And Issac Butterfield is in hot water again thanks to a joke, featuring in his new stand-up special Anti-Hero, about the Christchurch massacre that saw extremist Brenton Harrison Tarrant gun down 51 people inside two Mosques in the New Zealand city in March 2015.

Over the weekend, Almir Colman the Director of Australian Centre for Islamic Finance led a wide chorus of condemnation in a series of tweets in which he shared the offending joke, that took aim at the comedian.

“We don’t want to live in a totalitarian society where people are scared to demand their rights and live in fear from too powerful government or corporations,” he wrote.

“But in his joke about the victims of the Christchurch massacre, Butterfield is not going against some powerful forces nor is he using his voice to speak truth to power.

“Butterfield is bullying the most powerless and voiceless amongst us – he is haunting the survivors.”

Isaac took to his YouTube channel to post a rebuttal video on Monday arguing that when it comes to comedy, nothing should be off-limits.

“When people laughed at that joke, they had the same reaction that I did when I wrote it. I thought to myself that’s f**ing horrible, oh my God.’

“That’s the reaction because everyone knows what happened in Christchurch was horrible but we laugh about horrible things all the time – that’s how we deal with tragedy.”

Revealing that he had received a deluge of criticism and even death threats, Isaac added that he refused to apologise for the joke or his style of humour.

“I will not apologise for the joke,” Isaac said.

“This is not a TED talk. That clip that is going around it is not me in a public square addressing people who don’t know I’m joking. That would be f**ked up.

“I will continue to say horrible things because that is what I find funny and if you don’t find it funny then all you have to do is not watch it.”

Issac has previously courted controversy with his “un-PC” brand of shock humour, taking aim at everyone from feminists to cyclists on his 1.45 million subscriber-strong YouTube Channel.

He also made headlines last year over a Holocaust-related joke he told at the Melbourne International Comedy Festival.

Speaking to Newcastle Live in 2019, Issac said that he “embraced” the controversy surrounding his content.

“A lot of people enjoy horribly offensive humour – that’s what I love,” he said at the time.

“I love being offended I love seeing a comedian that gets up there and says something that makes you think ‘I’m an arsehole for laughing,’ that’s just how my mind works. I’ve tried to write clean comedy – I hate it.”