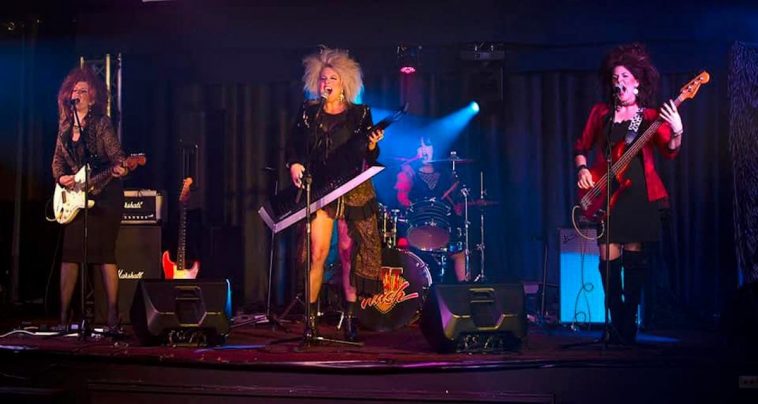 They’ve already melted many a Novocastrian face with a quartet of rock belters in Legwarmers, Hot Flush, Rock Attack and Big Hair.

And now, Newcastle’s rockingest ladies Hot Flush – aka Lozzie JoJo, Suzie, and Preezie have turned their attentions to matters of amour for their latest banger Cheap Love.

The track is set to drop on Valentine’s Day, making it the perfect musical accompaniment to that candle-lit dinner.

While we’ve yet to clap ears on the track here at Newcastle Live all signs point to it being a steamy rock extravaganza, with the band instructing fans to grab a fan and turn the air-con down to 16 degrees before listening.

The single’s accompanying clip also promises a first for Hot Flush fans as it will feature rare footage of the band performing live!

In a screenshot of the clip shared to social media, Hot Flush look very much in their bouffanted element with the ladies revealing that no natural fibres were harmed in the shooting of the video.

While Hot Flush’s local fanbase seems to be expanding exponentially, they have also found a fervent follower in none other than Karl Stefanovic after two cheeky appearences on Channel Nine’s Today in 2020.

However, it appeared that Karl was more taken with the band’s fifth member, Neville, Hot Flush’s moustachioed stylist.

“Talk to me about that clip and who that hot hunka hunka burning love is in that clip is he is magnificent,” Karl exclaimed.

“He’s our hairdresser and he just left the Blue Oyster Bar,” Lozzie replied in a cheeky nod to the Police Academy franchise.

Cheap Love is out on Sunday February 14. Head here to catch it when it drops!