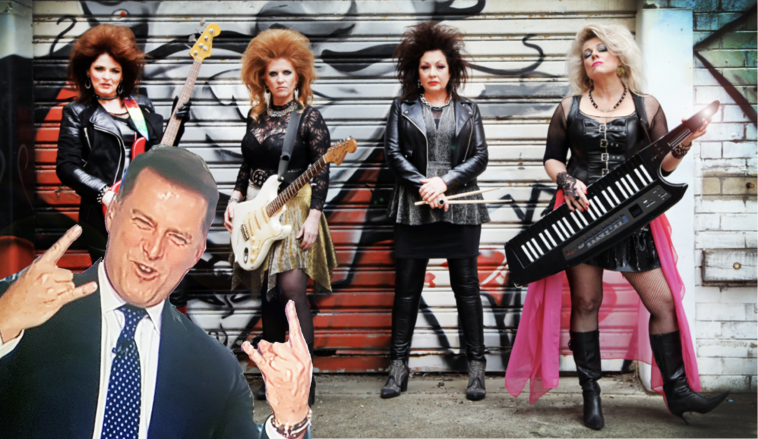 The band were on the show to promote their blistering new single Rock Attack and appeared to have the Channel Nine star quite hot under the collar.

Explaining the purpose of Hot Flush, bass player Jojo told co-host Allison Langdon: “Did you know there are only two creatures in the world that experience menopause? The female human and killer whales.

“And menopausal killer whales are the leaders of their pod so nature hasn’t forgotten the beauty, power and experience and wisdom of a certain age and Hot Flush is here to remind you about that.”

Check out Rock Attack below

The obviously smitten Stefanovic replied with: “You know what I just what to have a hot flush that’s not age-related and I’m sort of getting it now just looking at. you ladies all dressed up,”

The cheeky repartee didn’t stop there, after it was explained that: “we worked out we had seven children, six weddings, five divorces, and we just decided we are nearly 50, why don’t we join a rock band?”

“So who’s the one that’s not married,” Alison asked to which keytarist Lozzie replied: “One of us may have been married three times.”

“I have got to get you together with Dickie Wilkins,” Karl said – an offer that was unanimously rejected by the four-piece.

Karl added that he would “love to go out with you girls but I don’t know if I’d come back alive.”

The band who were filming from Muso’s Corner then went on to rip into a blistering acoustic version of their new single Rock Attack which had Karl headbanging and devil horning with glee.

Hot Flush also premiered the clip for Rock Attack which features the ladies busting out their best rock moves with a very ’80s aerobics video vibe, on Friday.

Recorded earlier this year before the COVID-19 pandemic, the music video was shot during ISO by each of the band’s four members from their home studios.