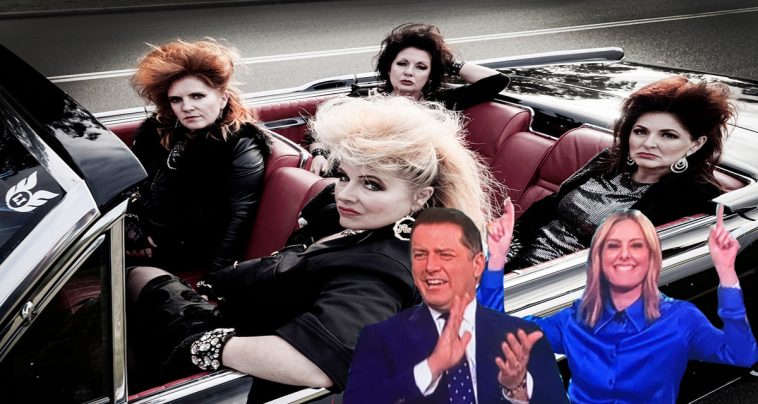 It appears that Newcastle’s very own rock divas Hot Flush have found their number one fans in Today hosts Karl Stefanovic and Allison Langdon.

The rocking four-piece appeared on the Channel Nine morning show on Thursday to promote latest single Big Hair and evidently made quite the impression on the TV duo.

However, Karl seemed more taken with Neville, Hot Flush’s mustachioed stylist who was revealed in the single’s accompanying clip.

Check out Big Hair below

“Talk to me about that clip and who that hot hunka hunka burning love is in that clip is he is magnificent,” Karl exclaimed.

“He’s our hairdresser and he just left the Blue Oyster Bar,” Lozzie replied in a cheeky nod to the Police Academy franchise.

Karl then revealed that Allison was a huge Hot Flush fan, admitting that “no one sings your songs louder than my colleague Alli,” before coaxing his co-host into a singalong with the band.

After admitting she didn’t know the words, things picked up when the band with their potential new member ripped into a rocking acapella version of AC/DCs Highway To Hell.

Hot Flush’s turn on Today comes on the back of an equally hilarious appearance earlier this year to promote their single Rock Attack.

Big Hair comes off the back of a trio of absolute bangers in the form of Legwarmers, Hot Flush and Rock Attack.

“It’s really about a transformation and the importance of having big hair,” JoJo told Newcastle Live.

JoJo, who also revealed that if she cant fit a budgerigar in her do she ‘isn’t interested’, added that while the style factor was important, there are more pragmatic reasons to rock a towering ‘do’.

“There are lots of wonderful things about having big hair,” she said.

“One is when you are a menopausal rock star, it really helps to channel the heat away from your head. You lose 90 per cent of heat through your head and having big hair just gives it a natural channel.”

The single’s accompanying clip, once again directed and edited by Erling ‘The Duke” Grønhaug, while definitely showcasing the four piece’s rock and roll swagger and, of course, big hair, also makes a star out of Neville the blow-dryer toting Sheriff of the Wild West of Hair.

“I had a hairdresser I went to for 20 years and after he retired I went into Neville’s studio one day and absolutely loved him,” JoJo said.

“Now all of Hot Flush has started going to Neville. He has done our hair and makeup since we became Hot Flush, so he’s kind of one of the girls.”

Given that Hot Flush sport arguably the most impressive quiffs in our neck of the woods it would be negligent not to ask what we flat-maned people can do to lift our hair game.

“If I could give a piece of advice it would embrace what you have because people are attracted to people who are satisfied with themselves,” JoJo said.

To coincide with the release of the single Hot Flush have launched a Big Hair Competition which is calling for fans to dress up at home and create their own big hairdos.

Entries will be accepted in Redhead Mummas, Brunette Women, Black-haired Ravens, and Goldilocks categories and you can win some fab prizes which may or may not include a one-on-one styling session with Neville himself.

All you have to to is snap a pic of your hirsute triumph and share it to the Hot Flush Facebook page or tag @hotflushrock on Instagram.