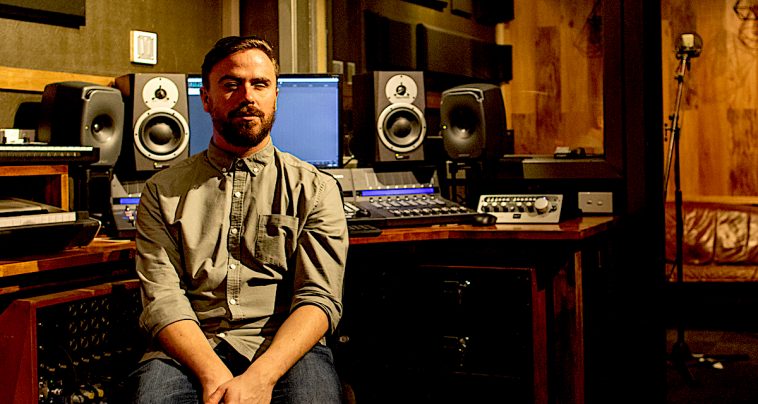 For Matt McLaren, music and audio have been a consuming passion for nearly as long as he has been alive.

“I’ve been playing music since I was very young – I started playing piano when I was three, but I’ve always loved technology and computers, recording and audio,” he said.

“I was the little kid running around with a tape recorder recording sounds I was always that weirdo. Sound has always been very interesting to me.”

The Newcastle musician has parlayed that passion into S&M Productions – a state-of-the-art recording studio which aims to work closely with artists utilising Matt’s enthusiasm for and knowledge of composition and arrangement, to bring out the best in their tunes in a truly bespoke way with sessions tailor-made for each client.

“I started S&M Productions a bit over ten years ago. It started out of my bedroom originally and grew and grew and eventually four years ago moved into this space,” Matt explained.

“So, I started recording bands but when I moved in here I sort of scaled that back a little bit – recording bands isn’t really my main area. Over time I’ve found what my niche is and it’s definitely not recording and tracking bands – there’s plenty of studios doing a great job with bands and I think we co-exist very well.

“My thing is bringing in musicians, singer-songwriters, soloists or duos and they come in with their song written or half-written and we develop it together which means they can work at their own pace.”

Matt added that S&M Productions works from a different template to the traditional recording studio set-up.

“Arrangement and production is my thing, which is different from sitting at a desk and pressing record. I want it to feel like less of a recording session and more of a collaboration, but the track remains solely the work of the artist” he said.

“For example, one of my current clients comes in for three hours a week. We record him doing guitar and vocals and then we start building up the track with other instruments.

“By the time he walks out he’s got a close to production-ready demo that we can flesh out further in the next session. It makes it really affordable and exciting because it’s only three hours at a time and we get rapid development on his product.

“I also pride myself on taking the technical aspects out of the equation for the client so they can concentrate on creating the best work possible.”

And it’s not just musos that Matt works with, either as S&M Productions is equally well versed in recording voice-over reads, podcasts, and composing for documentaries, television and cinema.

“There’s all kinds of different things happening here, which is great fun.”

S&M Productions is located at Studio 10, 61 Parry Street, Newcastle West. Head here for more info and to book your free consultation today. You can also find them on Facebook and Instagram