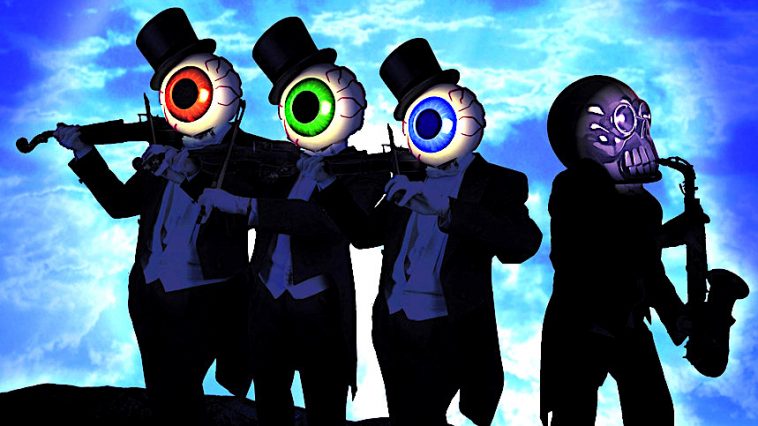 It’s almost time to celebrate all that is weird and wonderful, obscure and curious about music.

That’s because International Strange Music Day will be rolling around on Monday 24 August making it the perfect time to let your musical freak flag fly.

International Strange Music Day is the brainchild of New York-based composer Patrick Grant, who firmly believes that by broadening your musical spectrum, your outlook on other aspects of life can radically change.

So, if you only listen to Norwegian black metal, you could observe the day getting to know the work of Hank Williams. Or, perhaps you could give Taylor Swift a rest in favour of some Charles Mingus.

International Strange Music Day isn’t so much about those sonic fringe dwellers as it is about adding more ingredients to your musical gumbo, but here are some of our favourite left-of-centre acts that are definitely worth checking out…if you’re into that kind of thing.

While bands like Status Quo, AC/DC, and Bad Religion are often accused of writing the same song over and over again, none of them can hold a candle to Wesley Willis.

You see, pretty much every one of Wesley’s songs (save for his forays into frenetic punk rock with the outfit The Wesley Willis Fisaco), are based around the auto asccompaniment feature on his Technics KN Keyboard.

The structures of the songs remain constant and the only things that change are the lyrics, tempo and key.

He even ends each song with the line “rock over London, rock on Chicago” before delivering a popular product slogan like “Wheaties, breakfast of champions.”

Lyrically, Wesley deals with all manner of subjects including and certainly not limited to schizophrenia, superheroes, fast food and his favourite (and least favourite) animals and celebrities.

Wesley, who suffered from schizophrenia, said that his bizarre, funny, sweet, and sometimes offensive songs were written in an attempt to “gross out” the demons in his head enough so they would leave him alone.

Wesley, who sadly died in 2003, was the subject of a 2003 documentary, The Daddy Of Rock and Roll, which is highly recommended.

More of an art collective than a band, The Residents have been flying their freak flag since 1974, having released an impressive sixty albums as well as numerous multimedia projects.

Much like our very own TISM, The Residents prefer to toil in anonymity and are known to appear in creepy eyeball helmets and decked out in top hats and tails.

When it comes to their musical output, surreal doesn’t even begin to describe The Residents. These avant-garde artists are equally at home deconstructing popular music touchstones as they are creating complex conceptual albums.

The Shaggs were a trio of sisters – Dot, Betty and Helen Wiggins – founded in New Hampshire back in 1968 whose backstory alone would make for a fascinating film.

The band formed at the insistence of their dad Austin who reckoned that his mum had predicted he would have daughters that would form a band.

To make this prophecy a reality, Austin stopped the girls from attending school, prevented them from having friends outside the family as well as listening to music.

Problem was, The Jackson Five they ain’t and international stardom eluded The Shaggs most likely due to their rudimentary musical skills – skills that manifest themselves in a sweetly naive but, at the same time, unsettling way.

If you are of the opinion that there isn’t enough of an avian influence in extreme music, then you’ve obviously never heard Hatebeak.

You see, the frontman for this Baltimore-based three-piece is Waldo – a South African grey parrot who sings, or rather “death squawks”, over breakneck speed grindcore in a way that would have even Phil Anselmo reaching for a Throatie.

The band never tour because they don’t want to unduly stress Waldo out and they even put out a split release, Bird Seeds Of Vengeance, with New York grindcore band Caninus that boasted a dual vocal attack from two female pit bull terriers – Basil and Budgie.

If ever there was a band that truly defied categorisation, it would have to be Ween.

Across nine albums, Dean and Gene Ween have dipped their musical toes into pretty much every genre imaginable – sometimes in the same song.

It doesn’t matter which album you decide to delve into (although The Mollusk is an absolute triumph) Ween will definitely take you on a trip.