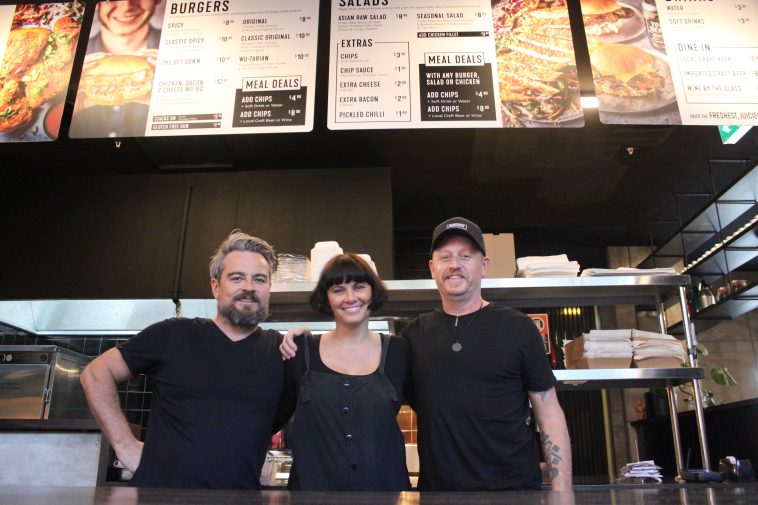 Matt Lovell and Harry Callinan are all about street food.

Mates for 30 years the pair have taken quite different directions in their respective careers, but a mutual passion for what Matt calls “the original fast food,” has been a constant in their relationship.

Matt has forged a successful career in the music industry – having won three Engineer of the Year ARIAs for his work on The Mess Hall’s Notes From A Ceiling, Eskimo Joe’s Black Fingernails Red Wine and Shihad’s Beautiful Machine.

His talents have also been heard on the big screen with Matt mixing the haunting soundtrack for the award-winning Aussie drama Snowtown and more recently working with Ridley Scott on Alien: Covenant.

Harry meanwhile is a celebrated executive chef who has worked in such kitchens as Bistro Molines and Roberts and Peppertree in the Hunter Valley and Woolarha’s Bistro Moncur.

He has also made his mark on the world stage having worked at the famed River View Room in New Orleans as well as Marriott resorts in Singapore and Phuket.

Fellow co-founder Paula Birch’s resume is no-less stacked either with the University of Newcastle-trained architect plying her trade in Sydney with Alec Tezannes Associates, in China designing architecture and furniture for a high-end resort in Fiji.

Paula (who has also worked as a casual academic and design tutor at the University of Newcastle for the past eight years) also started her own design consultancy in 2004 and counts Russell Crowe among her clients, while in 2016, Hotel Declic in Paris purchased three of her creative images to decorate a room in the hotel.

The trio’s mutual passion for street food has manifested in Wu-Cha – the Markettown-based fried chicken eatery that has been wowing local palates since Harry, Matt, and Paula opened the doors back in January.

“Harry and I have a lot of love for Asian street food and Wu-Cha is a kind of riff on Korean fried chicken.

“We just want to make everything as clean and as fresh as possible. We make all of our own sauces and pickles. It’s just fast, quality, affordable food.

“The chicken isn’t in the fryer for as long as some other places we keep it in for the shortest time possible so you don’t get that oily consistency. For us, the oil is all about making the chicken crispy.”

Wu-Cha has recently revamped its menu with what Matt said was a more streamlined ordering system and some new additions, including the option to buy single pieces ($3.90) or three pieces ($9,90).

But perhaps the centrepiece of the menu revamp is the addition of The Get Down Burger.

The deceptively simple-looking concoction is a cornucopia of flavour, offering a decent heat kick that is balanced perfectly with pickles and pickled daikon.

My favourite burger is The Get Down which is a habanero-base spice with pickled cucumber and pickled daikon,” Matt said.

“I think the balance of the pickle and the spice is just beautiful. it’s just a fillet, two pickles and the sauce. It’s simple.”

For Harry, Matt and Paula, the main mission of Wu-Cha is simple.

“Street food is kind of like the original fast food,” Matt said.

“It’s always really fresh and always really vibrant but can also be inaccessible to a lot of people because you often find the best stuff in back streets and out of the way places.

“So we really want to take that street food essence and make it much more accessible for people.”

Wu-Cha is located at Marketown. Head here for more info or just go and check it out for yourself.