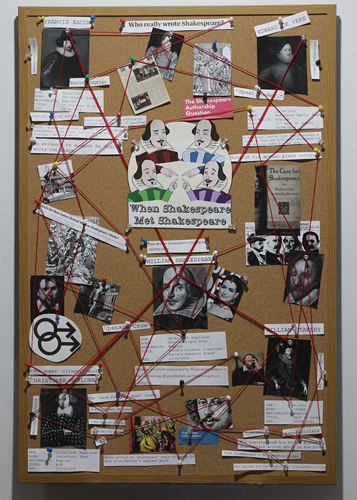 When Shakespeare Met Shakespeare pits four Shakespeare conspiracies against one another in a hapless bid to find the truth. The unfortunate subjects of these tired theories will test each other’s wit and patience in a playwriting contest in which only the audience will survive.

What if he was an aristocrat, or a criminal desperately attempting to hide his identity? When Shakespeare Met Shakespeare attempts to unmask the conspiracy theories through a playful piece of fast-paced banter between four central Tudor males who all claim to be the real William Shakespeare.

Our leads, Edward De Vere, Francis Bacon, William Stanley, and Christopher Marlowe jockey to prove themselves through measures of theatrical mettle, while the show asks the bigger questions: Was Shakespeare a real person or just creative nom de plume? Should anyone really care and does any of this even matter? Who is the real William Shakespeare? Whether this show helps you answer that question or not, rest assured, you will leave with a belly full of laughs and your curiosity satisfied.