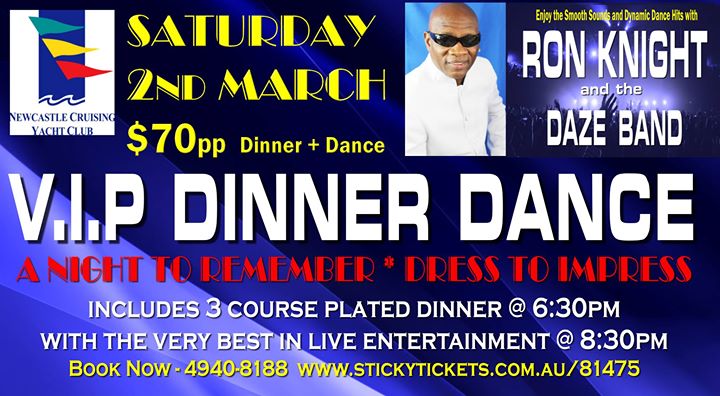 Newcastle Cruising Yacht Club is excited to be hosting first VIP Dinner Dance featuring Ron Knight and the Daze Band. This amazing 8 piece band will be bringing you the music you have been wanting to hear, with a great mesh of soul, funk, rhythm & blues with a splash of rock and country music to satisfy all their fans.

Ron Knight and the Daze Band is an explosion of musical genius – headed up by the one and only Ron Knight – the Sir of Soul & Rock’n’Roll – Ron became part of Australia’s heartbeat from his wins on Star Search Australia on the Channel 9 Television Network and since then Ron has worked internationally in Major Casino & Hotels around the world and has now returned from Las Vegas to Australia to re-form his band in which he was always able to show his immense vocal ability with.

With our Award Winning Menu, Chef & Fine Dining expertize, your evening will be a “Night to Remember” – so come dressed to impress, enjoy our vast selection of wines, cocktails, domestic & imported beers and top shelf spirits whist you dance the nght away overlooking the harbour at the Newcastle Cruising Yacht Club,