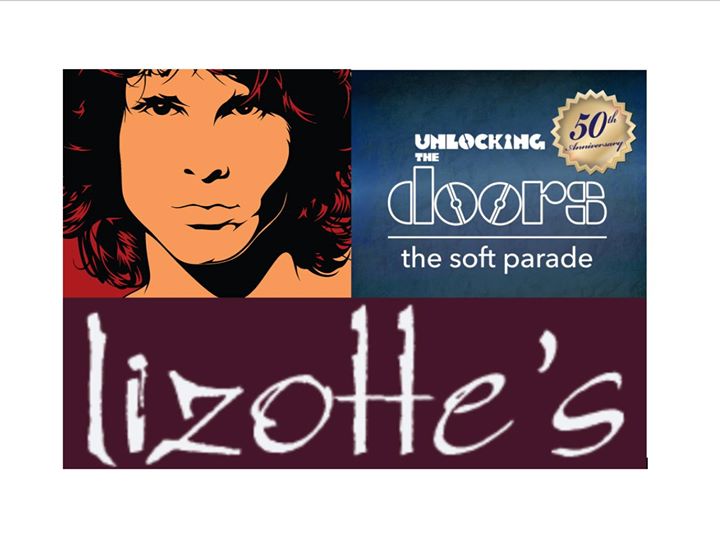 To celebrate and acknowledge the 50th anniversary of the landmark release of The Soft Parade, Wollongong band ‘Unlocking the Doors’ will be recreating this most interesting and controversial album, cover to cover, on Friday July 12th, 2019 at Lizotte’s in Newcastle. An additional 6 accomplished musicians will appear to cover the brass, strings and percussion parts in a live setting- the first time this has been attempted anywhere to the best of our knowledge.

The Soft Parade is the 4th studio album of the Doors, released on 18th July 1969. Produced by Paul Rothschild and engineered by Bruce Botnick, it is an undisputed departure from the previous albums, incorporating brass and string instruments to produce an eclectic and somewhat disjointed mix of orchestral, bluegrass/soul, jazz and rock inspired tracks.

The album was much anticipated, following the outstanding success of the first 3 albums, (Self-titled, Strange Days and Waiting for the Sun). It was created at a time when Jim had begun moving into a self-destructive spiral. He was transforming further away from the youthful, bare chested and sensuous star of 1967 and was in trouble with the law following the Miami incident in March 1969.
The band had little material left for a fourth album and, due to Morrison’s personal issues, Robby Krieger contributed more than half the tracks (including all 4 singles) for the
35-minute-long album in which the band was forced to write new material during studio time.

The Soft Parade has been harshly and perhaps unfairly condemned by many critics over time.
The Rolling Stone wrote “The Soft Parade is worse than infuriating, it’s sad. It’s sad because one of the most potentially moving forces in rock has allowed itself to degenerate. A trite word, but true.”
However, as written in Classic Rock Review “when you remove all of the fog surrounding it, the Soft Parade is a diverse, entertaining, and totally unique album of a great American band at a musical crossroads”

It achieved great popularity and respect from Doors fans and aficionados, reaching platinum status and spawning the hit single “Touch Me”, the Doors’ third most successful single (behind “Light My Fire” and “Hello I Love You”). Other singles released were “Wishful Sinful”, “Tell All the People” and “Runnin’ Blue”.
It also included the 8 and a half minute, convoluted title track of many separate movements, an epic composition of the scale of “A Day in the Life” (Beatles) or “Bohemian Rhapsody” (Queen). “The Soft Parade” is a song with great underground acclaim and is frequently requested by audience members at Doors tribute shows.

Don’t miss this opportunity to witness a complete performance of The Soft Parade as it was written, as well as enjoying some of your other favourite Doors songs in this unique showpiece!

SET 2:
A selection of Doors favourites performed by Unlocking the Doors