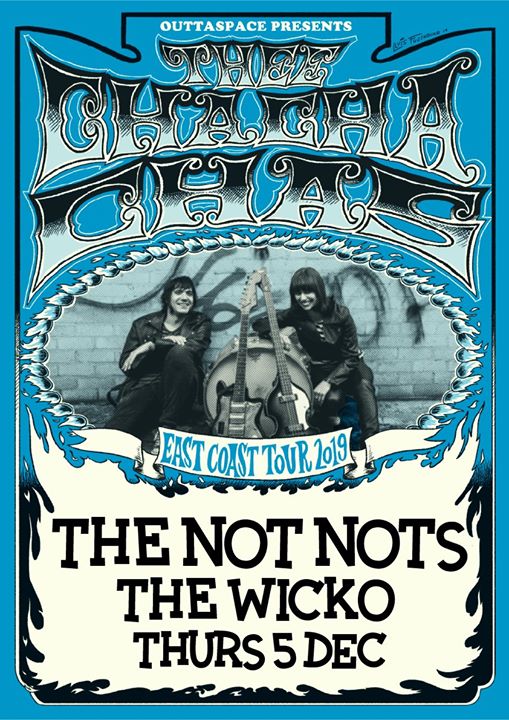 Thee Cha Cha Chas and The Not Nots Party!

Outtaspace Presents…THEE CHA CHA CHAS EAST COAST AUSTRALIAN TOUR!
A one-woman, one-man, garage-punk band from Melbourne, Australia, THEE Cha Cha Chas formed as a joke for a backyard battle of the bands in 2015…and the joke continues in 2019!
With guitar, bass, drums and male and female vocals, THEE CHA CHA CHAS have a full sound and an energetic stage show. Think: the love child of Dead Moon and Ramones, plus a dash of Sonny & Cher’s kooky garage-punk alter egos.
THEE CHA CHA CHAS have toured Europe (2016), Australia (2017) and recently returned from a tour of Spain with The Breadmakers, including two shows at the Wild Weekend Festival in Mallorca (2019). Next bat outta hell is 14 dates in Japan this October, including the Back From The Grave 2019 festival in Tokyo with cult legends The Mummies (US), old mates The Stompin’ Riffraffs (Japan), plus some of the dirtiest, fun, most rockin’ bands in existence.
Newy legends The Not Nots will open the night so don’t be late!