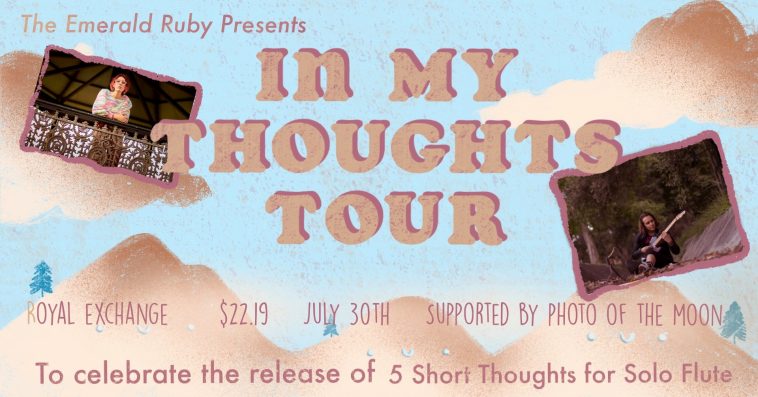 CANCELLED: The Emerald Ruby and Photo of the Moon @Royal Exchange Salon Theatre

Join The Emerald Ruby and Photo of The Moon for an intimate evening of Folk, Jazz, Soul and feelings at Newcastle’s sweetest independent theatre – The Royal Exchange to celebrate the release of 5 Short Thoughts for Solo Flute.

ABOUT THE EMERALD RUBY:

“Five Short Thoughts for Solo Flute” fuses the whimsy of Irish folk with the elegance of Western classical flute. These minimal arrangements feature an outpouring of emotion through meditative melodies. A salve for the soul and balm for the ears, this collection is a soothing escape to simpler times.

Her first musical home was the Orchestra, where Shostakovich and Stravinsky informed her understanding of structure and texture. In her teens, she fell for Alt Metal band System of Down, which combined with her study at University of Newcastle, saw her make the transition from pure classical musician to multi-genre powerhouse. She has toured and recorded extensively with The Button collective and experimental folk/jazz band Vanishing Shapes. She regularly performs with jazz rock band Othrship and psych rock band Lachlan X Morris.

ABOUT PHOTO OF THE MOON:

So the story goes..

In recent years he has been winning crowds over with his trademark vocal style and dynamic guitar wielding.

Sawell was born to a pair of paint slinging visual artists who would lull him to sleep with the sounds of Jeff Buckley and John Lee Hooker. Growing up he studied theatre and film while teaching himself music and production on the side. Inspired by the DIY ethos of self-made artists such as Bon Iver, Kate Bush, Neutral Milk Hotel and the Black Keys, he began to write and record his own music at the age of 17.

In 2015 Sawell wrote and recorded his first solo album ‘In Solitude, Least Alone’, pressing 500 copies and selling them in bars, pubs, weird dusty halls, tiny festivals, living rooms, markets and streets all across the country, solidifying himself as a hard working independent artist within Australia’s underground music scene.

Soon after, Sawell was joined by a group of talented musicians, performing high energy live shows down the east coast of Australia, whilst also recording an EP ‘Least Alone, Most Alive.’

In 2019 he set off for Europe, touring throughout Germany after a well-received performance at an open-mic in Hamburg’s Pony Bar.

Upon returning to Australia, Sawell was poised to create a vibrant and cerebral body of work imbued with voracity, tenderness, and sophistication. And so, Photo of the Moon was born.

No longer a strictly solo undertaking, Photo of the Moon is now collaborating across artistic disciplines, breathing new life and changing the voice of the project.