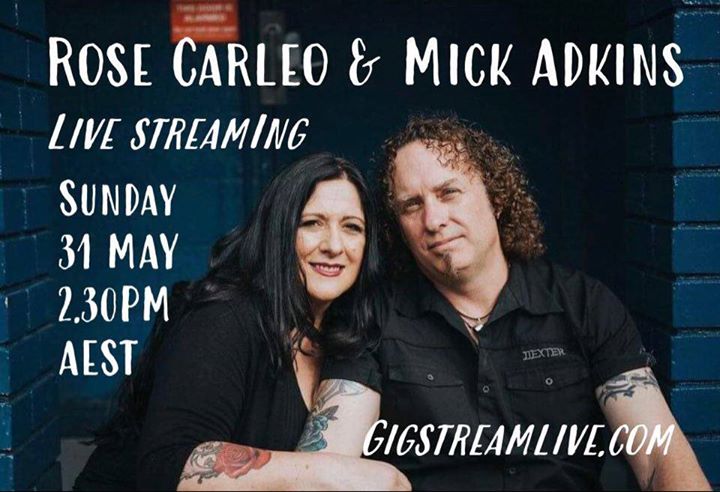 Help out your muso mates.

Join in the live gig fun (from your own socially distanced couch) and be part of the new wave of LIVE GIG STREAMING.

Sunday 31st May at 2.30pm AEST, Rose Carleo and Mick Adkins pick up the guitars and create a gig experience that shouldn’t be missed! Your Sunday music therapy is returning.

Acclaimed singer/songwriter Rose is most notably recognized for her exquisite yet wonderfully powerful voice. Her ability to bring life to songs and make them her own, is undeniable.

This award winning, ARIA Charting singer has a string of achievements to her name including Winner for Best Female Vocalist for the 2012 Victorian & National Country Music Awards and recognition by Australian music guru Glenn A. Baker with his request for the inclusion of Rose’s song “That Season Again” on his compilation album “It’s A Blues Thing” released by Sony Music in 2012.

With an EP and three albums to her name including 2015’s critically acclaimed and ARIA charting release ‘Time is Now’, described as ‘high octane with a rockin’ live vibe’ by Jessie Cunniffe of the Sydney Morning Herald, Rose has recently released her blues rock laced ‘Battle Scars’ EP with her band ‘Rose Carleo Band’ featuring Mick O’Shea on drums, Steve King on bass & Mick Adkins on guitar.

Accompanying Rose in ‘Duo Mode’ is guitarist and songwriter Mick Adkins. Mick’s background is guitar-based rock music; having played alongside many of Australia’s greatest singers and musicians. He has a passion for all styles of blues, rock and country blues guitar, making him the perfect guitarist to complement Rose’s powerhouse vocals.

Rose and Mick’s LIVE one hour set will cover a range of genres of originals and covers. This live gig performance featuring one of Australia’s greatest duos will have you yelling for more.. warn your neighbours!

** On gig day, choose your device of choice (we will go online 20 minutes before the performance), click on the gig link in your email to log in

** Once logged in, a 2nd Authentication code will be emailed to you (2 part authorisation for security). Please enter this code.

** Turn up the volume and enjoy the show!