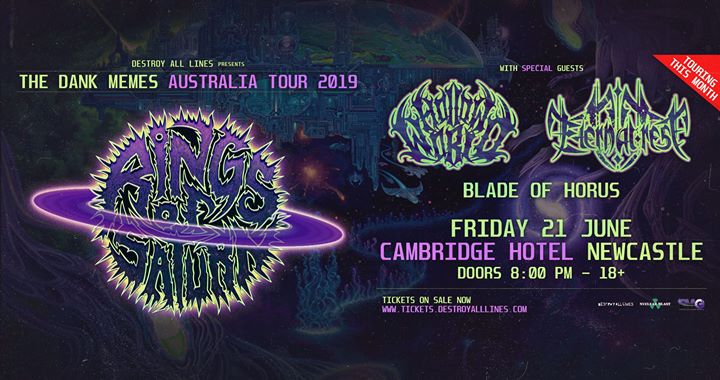 Self proclaimed Alien Death Core Texans, Rings Of Saturn have announced their long awaited and well over due first tour of Australia and New Zealand! The tech-death specialists will descend on our lands in late June along with special guests Hollow World and Eternal Rest!

Since self-releasing their debut album, Embryonic Anomaly in late 2009, Rings Of Saturn have built a huge global fanbase, touring non stop and releasing four albums.
Their 2015 appearance on the US based Knotfest showcased their spacey melodies and galactic chaos to a wider audience than ever before and they haven’t looked back.

With more than 30 tours under their belts, its high time the band brought their acclaimed energetic live show to their southern hemisphere fans!The bands fourth album, Ultu Ulla, was released in 2017 via Nuclear Blast and combines ultra heavy chug and groove with eerie soundscapes, soaring melodies and enough oddball fusion to truly make it a celestial event!

Joining the space race are Melbourne melodic death metal quintet Hollow World who have risen to high among the nations extreme metal elite to become one of the most exciting and sought after live acts in the country. Demolishing stages in every major city and countless regional places Hollow World have whipped crowds into frenzies on their own headline tours as well as opening for such iconic acts as Sweden’s At The Gates, Fallujah, Cattle Decapitation and our own Ne Obliviscaris. They have left their mark on festivals such as the Thrash Blast Grind fest which featured King Parrot and Revocation as well as Blacken Open Air and Dead of Winter.

Brisbane death metallers, Eternal Rest will deliver a set of intense and uncompromising brutality. Their sonic terror has been on display since 2013 when they took the Australian underground scene by complete surprise and they have blasted their way to domination ever since. With high profile supports such as Behemoth, Suffocation, Decapitated, Psycroptic, The Black Dahlia Murder and many more under their belts, Eternal Rest took their savagery to Europe with Whoretopsy and Condemned, winning over the crowds at every show.

Don’t miss one of the most enjoyable metal shows of the year! Strap yourself onto a Saturn rocket and blast off for a carnival ride among the stars!!