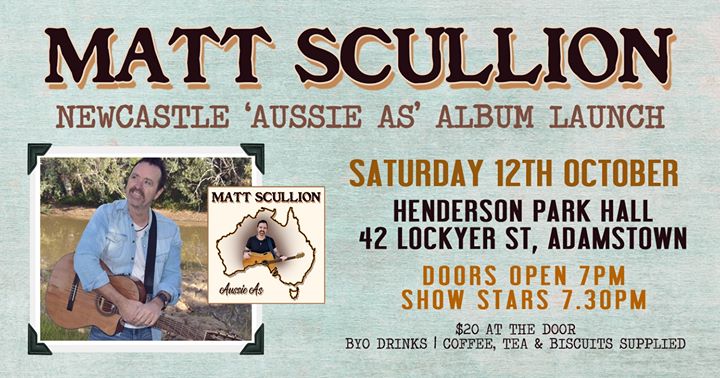 Hey Newcastle, Hunter Valley, Central Coast and lower North Coast friends. I’ve got my “Aussie As” album launch Sat 12th of October in Newcastle and would love nothing more than to see you there.
I’m putting the show on in a lovely little hall in Adamstown and it’s BYO drinks and snacks. We’ll also have complimentary tea, coffee and biscuits- plus a couple of great entertainers to kick the show off.
Colin DeFries is a fantastic bush poet from down Huskisson way who writes his own material, while Trinity Woodhouse is an up and coming local country singer who’s really starting to make waves with her songwriting.
Doors open at 7- show starts 7.30pm and it’s $20 bucks at the door. I’ll be performing all the songs off my brand new album plus a few I’ve written that have been hits for other people.
So if this sounds like your cup of tea, grab a scotch finger and have a dunk. Again I really hope you can make it, Cheers