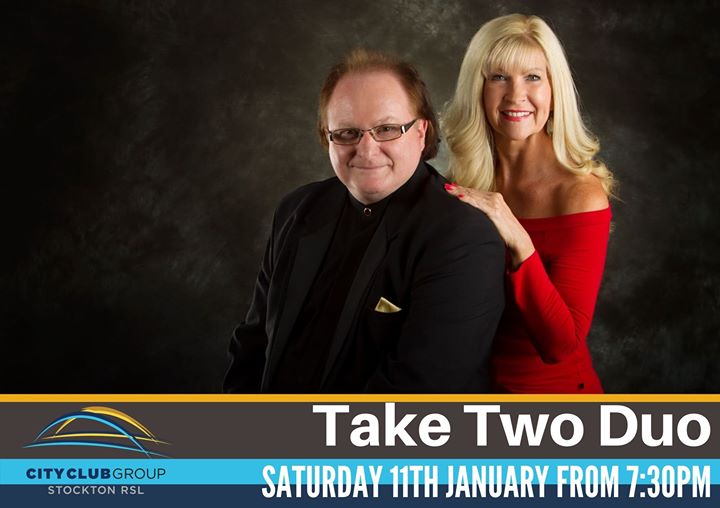 TAKE two highly professional and versatile entertainers…. and you have ……. TAKE TWO – KERRIE AND DARRYL.
They met during a television appearance and discovered their talents enhanced and complemented each other Darryl became Kerrie’s Musical Director, but their brief duets during the shows impressed audiences so much that they decided to form a permanent team.
TAKE TWO have since supported and toured with…..
LOVELACE WATKINS.
THE BARRON KNIGHTS THE BACHELORS, PHYLLIS DILLER, MATT MUNRO
ROLF HARRIS
RENEE GEYER.
TAKE TWO HAVE HAD MANY WORKING CONTRACTS WITH……
HOTEL INDONESIA
HOTEL BALI BEACH CTC CRUISES
P & 0 CRUISES
TOURED EGYPT, MALAYSIA AND THE U.K. and NEW ZEALAND.
TAKE TWO have won several MO AWARDS (Six in Total from 1990 to 2016), as well as Four ACE Awards, (Australian Club Entertainment Award) for BEST SELF CONTAINED DUO for their two man band working HOTELS, PUBS, THE CASINO, CORPORATE FUNCTIONS, WEDDINGS,.
Take versatility, professionalism, experience, showmanship, and a diverse repertoire with 50’s Rock and Roll to 70’s, 80’s, to recent hits from Katy Perry, Pink, Maroon 5, Bruno Mars……and more…..and you have
TAKE TWO DUO