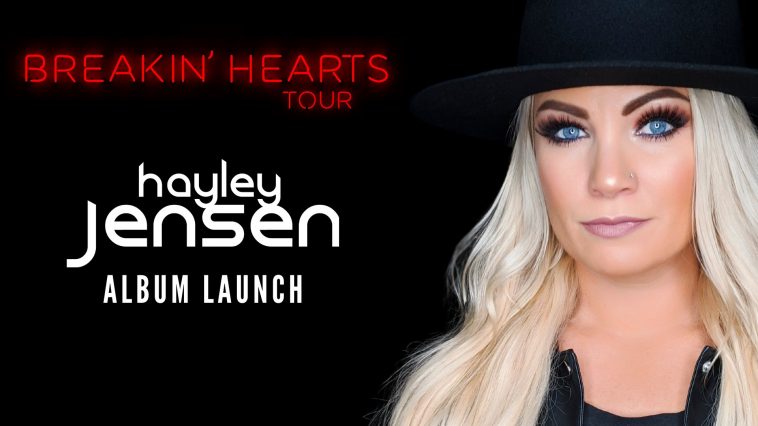 Hayley Jensen is hitting the road in 2021 for her biggest tour yet to celebrate the release of her highly anticipated 4th studio album, ‘Breakin’ Hearts’.

She has given fans a taste of what to expect with a number of hit singles already released ahead of the album, including ‘Fireworks’, ‘Just Gonna Party’, and the title track, which shot up the charts to become the #1 Australian song at Country Radio. It was also added to the ‘Fresh Country’ Spotify Playlist, was one of the Top 100 Songs at Canadian Country radio, and one of the most played songs on CBC Country on digital radio across the USA.

Hayley Jensen has wowed millions of fans for over a decade. From when she shot to fame and became a household name as top finalist on ‘Idol’, to her electrifying return to the small screen in 2014 on ‘The Voice’ where she was described by her coach Kylie Minogue as ‘the whole package’. Beyond the hype of television, Hayley has continued to build a successful career in her own right as an award winning country-pop songstress and entertainer.

Hayley has worked with a Grammy Award winning producer in Nashville, and performed on festival stages across Australia, the UK and Canada at Calgary Stampede & Dauphin’s CountryFest – the only Australian artist to feature in both official line ups. She also performed for Coalition forces in the Middle East alongside country star Beccy Cole, with whom she recently released the breathtakingly beautiful duet ‘Angel’.

With a growing number of hit albums, #1 singles, awards, and over a decade releasing music, Hayley Jensen continues to fortify her place as a leading act in the Australian music landscape. Best known for her powerhouse vocals, stellar songwriting, authenticity and unforgettable live performances – this is a show not to miss!

Lizottes is a family friendly venue & a Kids Menu is available for children under the age of 12.