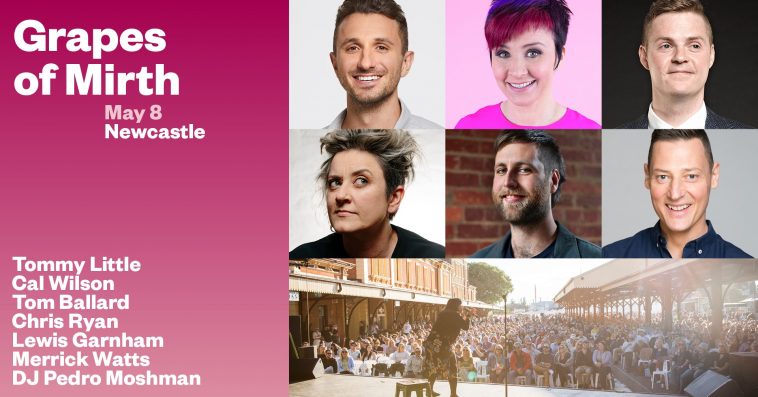 Grapes of Mirth is returning to Newcastle!

Five of Australia’s best comedians and your host Merrick Watts will make their way to The Station for over 6 hours of comedy, music, wine, gourmet grub and the most amazing festival vibes.

Plus, we’ll have six of the Hunter Valley’s best wine producers pouring the good stuff on the day!

TOMMY LITTLE – One of the most exciting comedians of his generation. For the last few years, Tommy has been the host of the Just for Laughs Stand Up Series from the Sydney Opera House, filmed for the Comedy Channel in Australia, and regularly sells out his live shows across Australia. He’s also co-host of Network Ten’s ‘The Project’ and national radio show ‘Carrie & Tommy’ on the Australian Hit Network.

CAL WILSON – Adopted Kiwi, Cal Wilson, crossed the Tasman in 2003 and has gone on to become one of our most popular comedians, a perennial favourite on many television shows including ‘Have You Been Paying Attention’. In 2018, Cal was invited by Netflix to the Montreal Just for Laughs comedy festival in Montreal to record a Netflix Original Comedy Special. 2019 also saw Cal become a very serious children’s author, penning two books.

TOM BALLARD – An award-winning stand-up comedian/actor/writer/broadcaster/person who always gives 100%. He’s one of Australia’s hottest comic talents, he’s performed and won acclaim all around the world; Edinburgh, Montreal, London, and he even once roast-battled Jimmy Carr and didn’t die in the process. His list of awards are many and extensive and include the Helpmann Award for Best Show and the Pinder Prize, both at the Melbourne International Comedy Festival. And boy, do we miss him hosting ABC’s ‘Tonightly with Tom Ballard’.

CHRIS RYAN – A former journalist, mother of two teenagers and one of the most exciting new voices on the Australian comedy scene, say hello to Chris Ryan! WINNER of the ‘Best Newcomer’ award at the Sydney Comedy Festival in 2019, Chris is in red hot form with her laconic take on everything from romance to passive aggressive co-workers.

LEWIS GARNHAM – There are few new voices on the Australian comedy scene as distinctive and exciting as Lewis Garnham. Nominated for ‘Best Emerging Artist’ and ‘Best Comedy’ at the Adelaide and Perth Fringe respectively and ‘Best Newcomer’ at the Melbourne International Comedy Festival. Prepare to be captivated by his potent combination of laconic, intelligent and introspective comedy.

MERRICK WATTS – The “Merric” from Merrick and Rosso. Mez, as he is affectionately known, has worked at almost every radio and TV station in the country. You might have seen him recently getting smashed in the face on SAS Australia, Australia’s REAL reality show. Mez loves wine, so much so that he’s a qualified sommelier, with dreams of retiring to a big Chesterfield, smoking a cigar and drinking Cabernet.

Grapes of Mirth provides the ultimate festival day with five headline comedy sets, a host with the most, and some sweet DJ tunes (brought to you by the one and only, DJ PEDRO MOSHMAN!) to keep you entertained before, between, and after the comedy has ended.

STRICTLY NO BYO FOOD OR BEVERAGE

PLEASE NOTE THIS IS AN OUTDOOR EVENT

ALL TICKETS INCLUDE YOUR TAKE-HOME WINE GLASS

The Station will be set up with temporary seating, so no need to bring anything other than yourselves. Empty soft cooler bags and water bottles are permitted. Bag checks will be conducted upon entry for prohibited items.