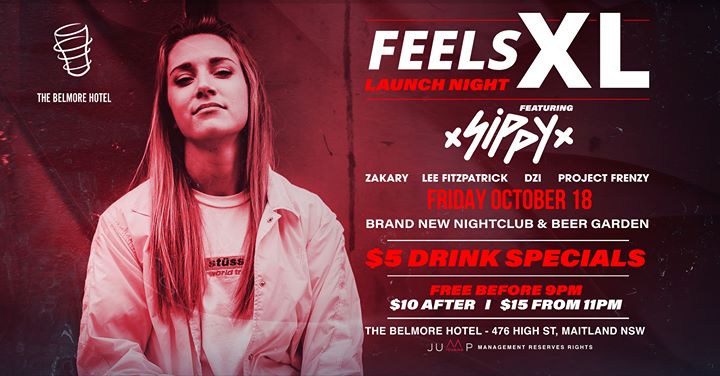 This is the launch night of FEELS XL and we are bringing one of Australia’s best bass music acts SIPPY to kick it off! 🙌🏼

SIPPY is a Sydney based bass music machine – anyone who’s spent time on the Australian bass music circuit knows the name. She’s built her career blasting her signature gut-rattling seizure-inducing sounds through the sound systems of her country’s famous clubs and festivals, including residencies at Chinese Laundry and The World Bar, and a graduate of the famous ICON Collective Music Production school in Los Angeles. Sippy prides herself on bringing much needed courage and realism to the scene.

As a result, her name is synonymous with a fearlessly filthy, heavy, extremely creative and precise bass-forward sound. She counts the world’s biggest Bass and EDM producers among her most avid and vocal supporters including Zeds Dead, Bear Grillz, Shockone, plus more

With an official remix for the Chainsmokers under her belt, her first original single released on Deadbeats (on the We Are Deadbeats Compilation Volume 3), partnerships with Nike and Roli, and more projects on the way including her forthcoming EP, one can only describe Sippy’s rise as meteoritic with no signs of slowing down. 2019 we can only expect to see big waves being made from this young producer, a new force to be reckoned with in the bass music scene.