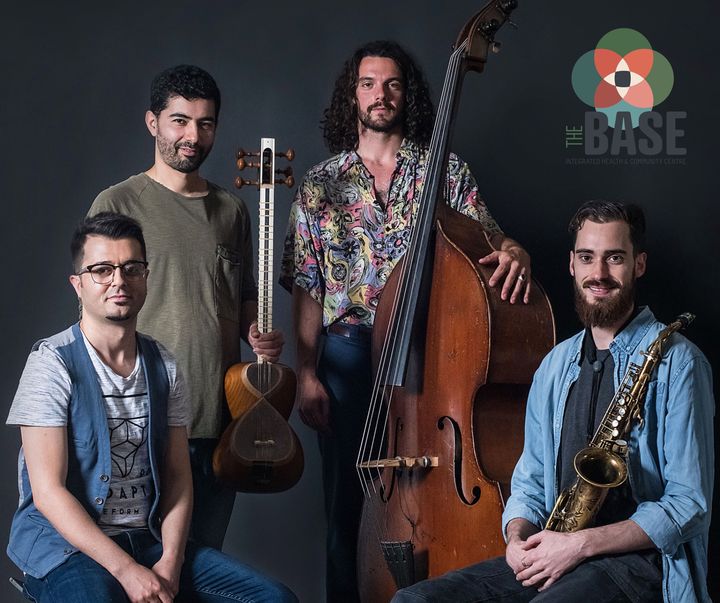 Eishan Ensemble at The Base

“Eishan Ensemble is a rare attempt in fusing contemporary Persian classical music with modern jazz… a flawless combination, as evidenced by the fine compositions on this debut recording.” – Songlines UK★★★★

“It’s the quality of the Sadeghi’s compositions and the opulence of the ensemble sound as much as any soloing that makes the music so enthralling.” – Sydney Morning Herald AUS★★★★1/2
Led by acclaimed Persian-Australian tar player and composer, Hamed Sadeghi, the quintet Eishan Ensemble draws on contemporary and classical music traditions of both East and West. Eishan’s repertoire consists predominantly of Sadeghi’s original compositions with diverse improvisatory idioms featured powerfully. Variously described as “Persian chamber jazz” and “Middle-Eastern jazz fusion”, Eishan defies neat labels.
Sadeghi’s psychedelic virtuosity is joined by the individual talents of Michael Avgenicos on saxophone, Maximillian Alduca on double bass and Adem Yilmaz on percussions, to create the layered and sophisticated soundscapes of Eishan.
Formed in 2016 and currently based in Sydney – Australia, Eishan has performed internationally in Iran, Malaysia, Singapore, The Philippines and Taiwan; and nationally in Australia. Their first album Nim Dong was released late 2018 to critical acclaim.
2020 sees the release of their brand-new album “Afternoon Tea at Six”. Their much anticipated 2020 National and European tours have now been moved forward to 2021.