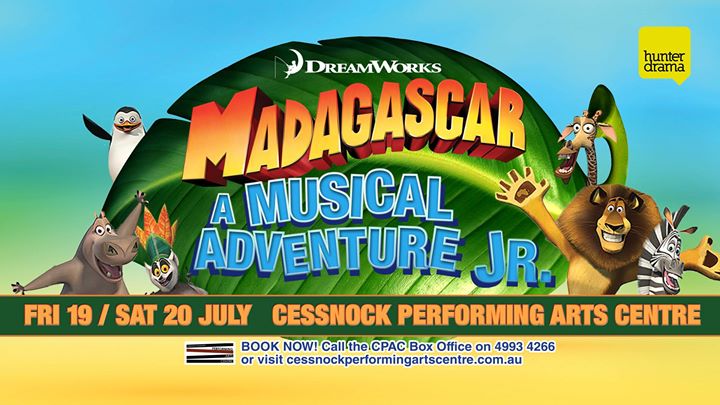 Take a journey out of the zoo and onto the stage with your favorite crack-a-lackin’ friends from the blockbuster DreamWorks film.

Alex the lion is the king of the urban jungle, the main attraction at New York’s Central Park Zoo. His best friend Marty, longing to experience adventure, escapes from the zoo to explore the world and to be ‘Wild and Free’. His animal friends from the zoo pursue Marty into New York City and are reunited. Through a series of events, they are shipwrecked on the island of Madagascar where they meet the flamboyant King Julien and the other lemurs.

As with last year’s sellout production of Aladdin JR, students from across the Cessnock local government area will get the opportunity to audition to become a cast member of this hugely popular Academy Award Winning Disney musical.

Filled with outlandish characters, adventure galore, upbeat music and dance numbers, stunning set and vibrant costumes, Madagascar JR will leave you with no choice but to “Move It, Move It” and will have you clapping and dancing in the aisles!