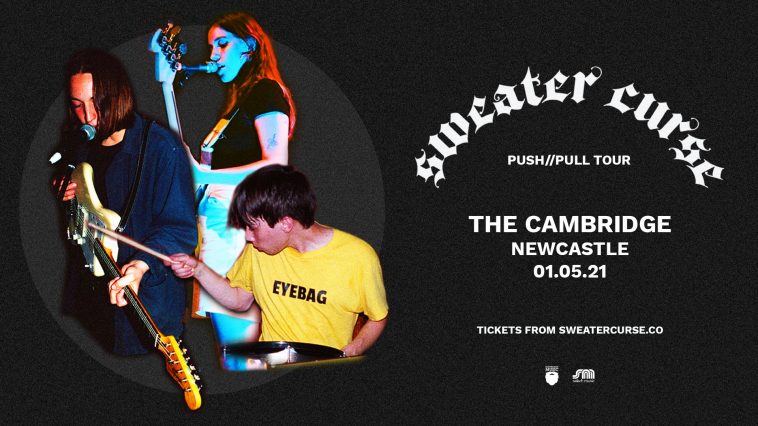 In celebration of the release of their second EP push//pull, sweater curse today reveal a string of Australian tour dates – this is their first interstate tour in nearly two years! After a sold-out EP launch at The Tivoli, the band will kick off in April stopping in cities Adelaide, Hobart, Melbourne, Sydney, Newcastle and Wollongong. Prepare to be dazzled by the mystifying stage presence blended with raw and emotional indie rock, as they play their delicate and brooding collection of songs from their EP alongside old favourites.

Produced by Ball Park Music’s Sam Cromack and featuring a track co-written with Alex Lahey, push//pull takes sweater curse’s signature sound and steers it in a new sonic direction. The band will also continue to work Sam as they plan to head back into the studio to start recording their debut full studio album. Keeping busy throughout 2020, the trio have been playing to packed venues across Brisbane including New Years Eve show ‘Regards, 2020’ with bands Beddy Rays, Death By Denim and Alex Lahey who co-wrote their hit single ‘Close’, as well as joining an array of other Australian artists who participated in the online festival series ‘Isol-Aid Festival’.

Their most recent live performance saw them contribute to the ‘A Carry 4 Coins’ charity concert alongside WAAX, Tia Gostelow, Emily Wurramara, Teenage Joans and Pink Matter, in support of Black Rainbow, an organisation and social enterprise in pursuit of the health, wellbeing and suicide prevention of the National Aboriginal & Torres Strait Islander LGBTQIA+ community.

Sweater curse have wasted no time making a name for themselves over the last few years, their EP was named ‘Album Of The Week’ and their songs were on high rotation at Radio Adelaide, 4ZZZ, FBi Radio as well as both triple j and triple j Unearthed, on top of ‘Close’ amassing over 180,000 Spotify streams and attracted significant praise from publications such as NME Australia, Life Without Andy, Music Feeds and Paste Magazine, amongst others.
Both ‘Close’ and ‘All The Same’ were seen on Spotify editorial playlists New Music Fridays, Local Noise and Indie Arrivals as well as Amazon Music’s editorial playlists Fresh Indie and Brand New Music. Their live performances prior to 2020 include appearances at St. Jerome’s Laneway, Falls Festival, Farmer & The Owl and playing with bands The Jungle Giants, Grinspoon, Violent Soho, Middle Kids, Ball Park Music, Bugs and Polish Club.

Whether you’re a long-time devotee or a new fan, join sweater curse for an intimate music experience into their innermost thoughts and feelings.