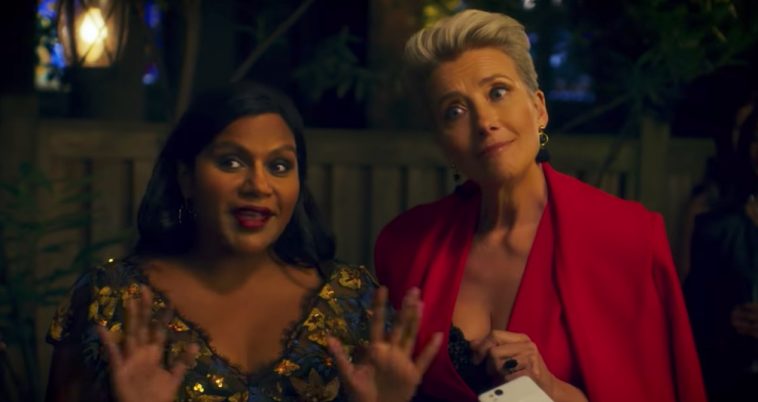 Katherine Newbury (Emma Thompson) is an acid-tongued, straight-talking, late-night talk show host who, it would seem, is past her prime.

Suspecting (quite correctly) that she is about to be ousted for a newer, shinier model, and yet refusing to alter her tried and tested but suddenly faltering talk show format, she hires Molly (Mindy Kaling) as a ‘token female’ hire.

Molly is thrust into a male-dominated world but isn’t going to let that stop her from getting what she wants.

The all-male writing team, some who’ve never even met the star of their show, is about to be served up a stone-cold dish of welcome to the 21st century, boys.

When Katherine stalks into their office demanding change, they’re stunned. When she arrogantly refuses to even learn their names, instead of numbering them from one to seven, their cushy little world is thrown into chaos.

But it’s Molly’s arrival that really sets the proverbial cat among the pigeons.

When you combine Katherine’s sharp, biting and very English wit with Molly’s understated but gently forceful way of getting things done, you’ve got a recipe for comedy gold.

But this movie is so much more. While it does highlight workplace sexism and ageism, especially in the #MeToo environment, it doesn’t shy away from the fact that our movie heroine is not entirely innocent.

With a surprising twist, the movie takes an unexpected turn and yet, doesn’t shy away from its truth.

Thompson’s very cold, icy persona makes the perfect foil for Kaling’s more warm and earthy screen presence. The way they speak, think, operate, dress and even walk are polar opposites of the other yet, when they come together, they are in perfect unison.

The movie is not quite the comedy fest that I was expecting but that didn’t make it any less entertaining. The comedy is clever and subtle, as any fan of Kaling’s has come to expect.

I liked this movie very much. It has a strong female narrative, but it never felt the need to hit you over the head with it. And I loved that.