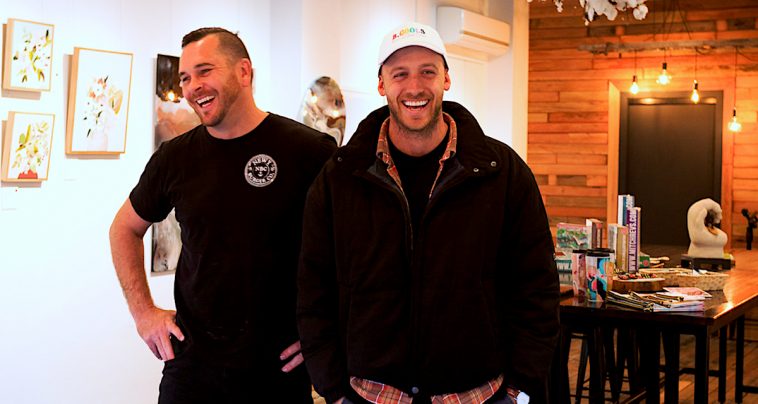 A passion for Newcastle and its many talented creatives has spurred artist Mitch Revs and Newy Burger Co. owner Ben Neil into action.

The pair have recently opened Makers/Creators – a bricks and mortar collaborative creative space designed to give our local artists a hub in which to display their talents.

Speaking to Newcastle Live, Mitch said the concept, which originally sprang up as an online portal on his website, came about after the pair discovered a shared drive to put something back into the city.

“Makers/Creators was a digital platform that was born on my website – it was home to all the creatives that we sponsored through the shop and did all of their custom printing and framing,” Mitch explained.

“It was really sad to see the frame shop that was where Markers/Creators leave when COVID first hit and Ben and I have always been about…just look at Hunter Street, there is so much potential but there are so many f**king vacant shops. Every second shop is empty.

“We don’t like that because it makes businesses around that not look as great. It’s like having a nice house on a nice street and having a shit hole next door.”

Mitch said while the concept for Makers/Creators is still evolving he added that aside from showcasing local artists, a large focus of the space will for private functions, events, pop-ups and venue hire.

“Ben wants to make the most out of this being a space to do private and corporate functions but in more of an intimate space to what he’s currently got,” Mitch said.

“Newy Burger Co obviously get a lot of enquiries about large functions and they don’t have the facility to do that. And that’s where Ben comes into it – being able to fill that void and allow people to dine in a nice space.”

And he was full of praise for Ben’s positivity, especially when it comes to wanting to do more for the city.

“Ben is one of the most supportive guys out there – even when he’s doing it tough he’s out there trying to help the community and trying to think of ways to make things better,” Mitch said

“So that’s the reason I partnered with him – I couldn’t think of a better person to team up with and make that change in Newcastle.

The space will feature a range of artists, working across various mediums who will be rotated on a monthly basis.

“If we can give local artists an opportunity to show their work in the CBD that’s perfect for us,” Mitch said.

He added the popular Pino & Picasso Paint and Sip workshops that run out of his gallery will also be extended into the new space.

“It’s perfect timing due to the number of people we can have in a space at any given time,” Mitch said.

“Now we are able to split all classes in two and run half class either side just to give people that extra space and peace of mind.”

Makers/Creators is located at 1/451 Hunter Street, Newcastle. Opening hours are 10am-4pm Tuesday-Friday. There are plans to open on some Saturdays in the future. Head here for more info or phone 4048 0299.