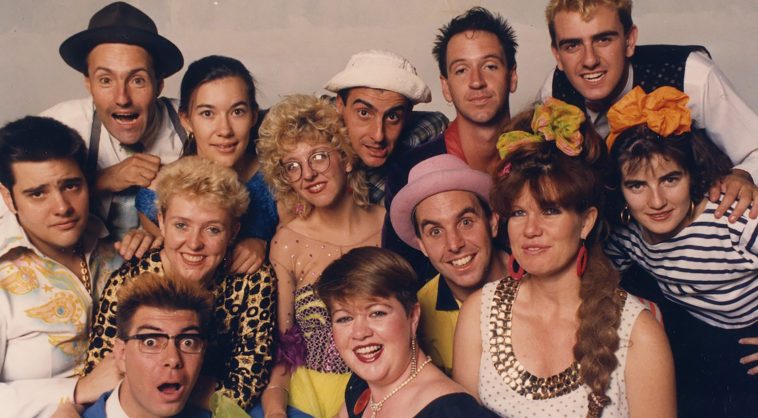 They were the madcap, irreverant and always hilarious comedy ensemble that took their inimitable mix of theatre, comedy, dance and music from Newcastle to the world.

And, almost 40 years since the members of The Castanet Club first graced the stage at the back of the Clarendon Hotel, the iconic ensemble are the focus of a new exhibition coming to Newcastle Museum this month.

Castanet Club: an exhibition you can dance to promises to transport you back to the halcyon days of The Castanet Club, whose members included Stephen ‘Sandman’ Abbott, Mikey Robins, Glenn Butcher, Penny Biggins, and Maynard, using a kaleidoscope of posters, photographs, scripts, records, and VHS and cassette tapes.

“The Castanet Club began as a group of friends living, studying and working in Newcastle in the early 1980s and went on to become a legend of the Australian cabaret circuit, gaining national and international acclaim,” Newcastle Museum director Julie Baird said.

“This exhibition uses items from the Museum’s own collection, which were donated by former Castanet manager Jodi Shields, and includes additional memorabilia borrowed from members of the band, as well as a new artwork by acclaimed local artist Michael Bell, who created the original pop-art aesthetic of the Castanets.”

The exhibition will also serve as the launch of the book The Castanet Club: Tales of an Artistic Collective In Newcastle 1982-1991 by art curator Therese Kenyon and artist Stephen Clarke.

“Newcastle is a creative and innovative community with a vibrant cultural history and an amazing depth of talent within its performing and visual arts sector,” Julie said.

“Exhibitions such as this provide a vehicle through which we can share our stories, explore our identity and celebrate the collaborative nature of the city’s creative and performing artists.”

The Castanet Club began performing in the back room of the Clarendon Hotel in 1982 and quickly gained national attention, touring Australia, winning the best of the Adelaide Fringe award and performing at the iconic Edinburgh Festival.

Lauded theatre and film director Neil Armfield committed the story of the Castanet Club to the big screen in 1990 before they finally stepped off the stage in 1991..

Castanet Club: an exhibition you can dance to opens at Newcastle Museum on Sunday 11 July and runs until Sunday 31 October. Head here for more information.

Also on Newcastle Live
Olive Tree Market to sprout later this month due to COVID concerns
Chopper back on the big screen for 20th anniversary
Mayfield Bowlo to host a night of food and funnies this month!
Maitland apprentice chef vying for glory in trans-Tasman cook-off!