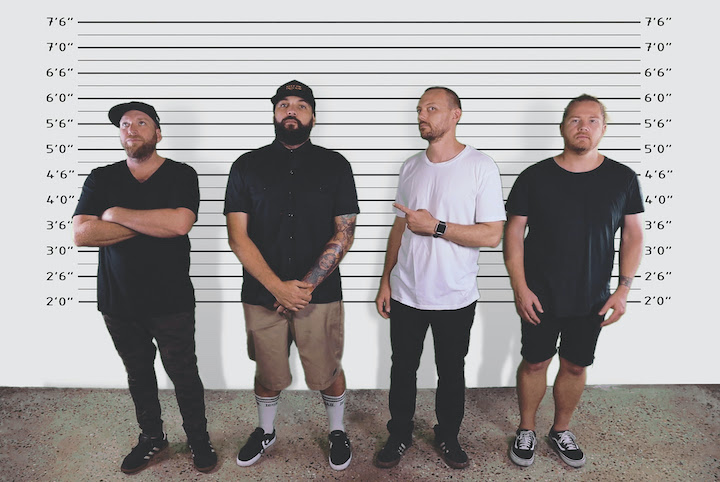 After two raucous Newcastle shows in Newcastle last year, Brisbane hip-hoppers Butterfingers will give local fans a taste of their first album in 14 years this May.

It’s been a long time between drinks, so to speak for the Butterfingers crew, with their last album The Deeper You Dig dropping waaaay back in 2006 but they’re making up for lost time with Bad News which is set to hit the ether on March 30.

Evil Eddie and co, this week gave us the first taste of what to expect on the new record, in the form of single Dancing (To The Beat Of my Own Drum).

This frantic banger is the perfect re-introduction to the I love Work hitmakers with its no-holds-barred approach.

“We’ve drawn from a lot of different artists and genres over the years but the new track and album are born from our most recent influences, which range from alternative rock to grime and trap,” Evil Eddie said. “Of course, we’ve put our twist on all of it and it’s still definitely Butterfingers.

“Dancing (To The Beat Of My Own Drum) is that scene in the film when the protagonist slays the dragon, if you know what I mean.  It’s just about that feeling when you’re absolutely sure and confident with who you are and what you’re doing, that no one else’s opinion matters anymore.”

Speaking to Newcastle Live in 2019, Evil Eddie said the album was their most cohesive to date and one for which they set the creative bar quite high.

“We’ve definitely pushed ourselves in both directions for this album,” he said.

“I mean, we’ve always played the rock stuff but it was always kept pretty separate to everything else we were doing. I don’t want to say it’s a rap-rock album because I hate rap-rock, but there are some pretty big riffs in there.

“Also, we’ve really pushed ourselves lyrically for this one – you kind of have to when you look at the amount of talent we have in this country now. It’s crazy. Also, the album is a story from start to finish – every song is like a scene from a movie.”

Catch Butterfingers at the Cambridge Hotel on Saturday 23 May. Tickets are on sale here on Monday 3 February.

ALSO ON NEWCASTLE LIVE
THE MORE THE MERRIER: Gum Ball gets even more BEAUTIFUL with another lineup announce
HERE TO HELP: The Wiggles partner with BIG W for FREE book series!
REVIEW: Jojo Rabbit’s satire is as delightful as it is insightful
PUPS AT THE PUB! Honeysuckle Hotel to host event that’s gone to the DOGS!